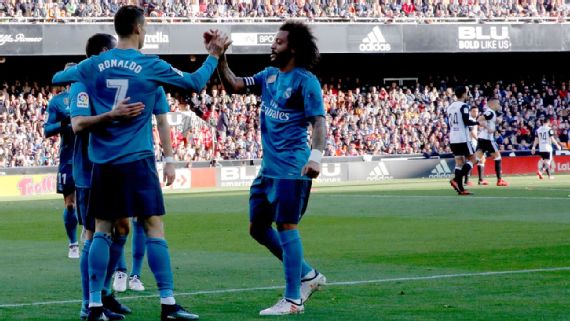 Real Madrid manager, Zinedine Zidane, has described their 4-1 win over Valencia on Saturday, as an “important result”

Zidane, who has been under fire lately, praised his team for having “personality” after recent setbacks.

The home side missed chances to level the game, before late goals from Marcelo and Toni Kroos sealed a much-needed win for Real.

“I am very happy as it is an important result, not just the result, but we played very well,” Zidane said.

“We had a lot of possession in the first half and when I see my players play like that I am happy.

“This is a difficult stadium, a team which has done fantastic in this league, were ahead of us in the table. I am very happy with how [my players] did physically, and also tactically.

“In the second half we suffered for a bit, which is normal, and Keylor [Navas] saved us. We must admit that. But within the game as a whole we deserved the victory. Winning like this, 4-1 here, is nothing easy, we must congratulate the players.”