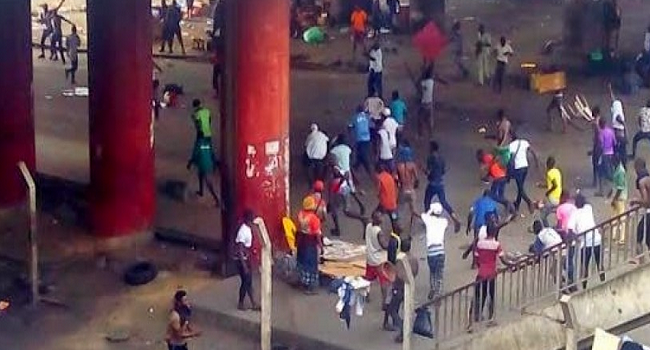 A factional crisis, believed to be connected to the forthcoming governorship poll in July 14 is currently brewing in Ekiti State as factional parties opposed to the current leadership of both the Road Transport Employers’ Association of Nigeria (RETAN) and Oodua Peoples’ Congress (OPC) have allegedly sent war signals to the incumbent leaders.

DAILY POST gathered that while one Niyi Adedipe, former OPC state coordinator in Ekiti had allegedly attacked the current OPC coordinator , Sola Ojo and some members of the Pan-Yoruba group, inflicting serious wound on a member, former chairman of RETAN in the state, Rotimi Joseph Olabiwonnu, aka Mentilo, has also allegedly vowed to take over forcefully from the current leader of the union in the state, Pastor Samuel Olugbenga Agbede.

It was gathered that the two ex-leaders made the threat on January 31 during a rally organised by the All Progressives Congress (APC). While Agbede had written a petition to the state Commissioner of police, Ibrahim Chafe, Ojo had also reported a case of assault and malicious damage to the police command.

Ojo, who spoke to newsmen yesterday on the development, said: ” on January 30, Niyi Adedipe, aka Apase, left the rally he had joined with his APC members and brought many of his boys to our base in Ori Apata in Adebayo area of Ado Ekiti, they were many and were armed with dangerous weapons such as cutlasses, guns, and cudgels. They came to attack a few of us and were threatening to kill us. We ran for our dear life but they succeeded in wounding one of us, Tope Ajibade , aka Akoto, on his head, leg and hand. They vandalized my vehicle and took away a sum of N250,000 I kept in the car and my cell phone. They also made away with Akoto’s cell phone and his money. We have reported the matter the police for proper action. We want the government to protect us from them as they are very dangerous. Apase and others have just been released from the prison over a murder case of allegedly killing former Chairman of the National Union of Road Transport Workers (NURTW), Chief Omolafe Aderiye in 2014. There has been peace when the guys were detained but just a few days they were released for want of strong evidence, they have began to forment trouble again,” Ojo alleged.

Confirming the attack on Ojo and other members of the OPC in the state on January 31, Commissioner of Police, Ekiti State, Ibrahim Chafe said a certain Tope Ajibade was assaulted and wounded on his head, and had some bruises on his hand on the said date. He said the attack was alleged to have come from a certain Adedipe, adding that though an arrest warrant of the suspect was ready, efforts to get him has proved futile but the case is still under investigation.

” We can confirm that one Niyi Adedipe , a factional member of OPC in the state, allegedly attacked one Tope Ajibade , an OPC member on January 31 . Based on the witnesses and victims’ account, Adedipe had assaulted Ajibade who was wounded on his head and had bruises on his hand. Meanwhile there was a peaceful rally of the APC members in Ado Ekiti on same day. Adedipe is currently been looked for by the police. The man is no where to be found as we have been to his house and served notice of invitation on him. We have also charged him with deliberate assault and malicious damage to a car of one Sola Ojo. I want to assure you that we are still looking for him and will bring him and we will hear his side of the story when we find him,” he said.

Promising to ensure the safety of lives and property ahead of the July 14 gubernatorial election, Chafe, who addressed newsmen through his Deputy Commissioner of Police, (DCP), Dasuki Digalanji, said his men were ready to take on anyone who wants to disrupt the peace the state is currently enjoying ahead of the poll.

In a petition, dated February 2, 2018, addressed to the Commissioner of police, Ekiti State command, the state governor, Ayo Fayose , State Security Services, and National Secretary, RETAN, from the chambers of Agbede O. Rotimi and signed by Rotimi .O. Agbede, Agbede alleged that Olabiwonnu , and two others, identified as Bayo Aderiye, and Kayode Ajayi, did threatened to attack all the bus terminals where current members of RETEAN in Ekiti are operating and take over from them.

The petition reads in part: ”

“….the trio (Olabiwonnu, Aderiye and Ajayi), of the aforementioned people and some others held a rally on January 31, during which time they made an open declaration at Okeyinmi Street, Ado Ekiti to the effect that they are coming to attack all the motor parks that are being controlled and supervised by members of Road Transport Employers Association across Ekiti.”

Speaking further, Agbede said Olabiwonnu’s tenure terminated on January, 2014 when he was allegedly sent out by the national body of the union.

He said a new election that was conducted by the Caretaker Committee at the instance of the national body brought him in as the new chairman of the union in the state with a mandate to serve his full tenure.