by Khad Muhammed
January 6, 2019
WhatsApp
Facebook
Twitter
Some hoodlums suspected to be arsonists in the early hours of Sunday burnt down no fewer than thirty shops and houses located along the popular Beere-Molete road in Ibadan, the Oyo state capital.

The affected shops and houses according to sources who spoke with DAILY POST included those located at Idi-Arere, Bode up to the ones at Allelluyah petrol station, all in the heart of the ancient city.

One of the residents confirmed that parts of the affected structures included shops belonging to fashion designers, soft drinks sellers, electronics shops, frozen foods’ shop and cooking materials sellers’ shops among others.

Another resident of the area who spoke with DAILY POST in confidence confirmed that the incident occurred midnight when many of the residents of the affected areas were still sleeping. 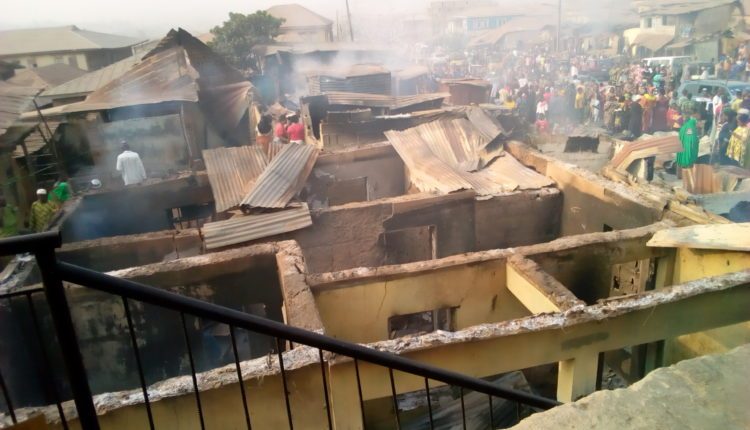 He said that the hoodlums stormed the areas and burnt all the shops and houses located along the road.

He said, “It is not up to Popoyemoja, it was only at Idi-Arere, Bode up to Allekuyah petrol station. It is a case of arsonists. They burnt houses and shops too. So, it was very late, though it happened in the midnight.

“It was when we woke up this morning that we saw everything. It is not up to Popoyemoja, it stopped at Idi-Arere. From that junction to Bode road.

“About 30 shops, if I have the opportunity, I will send your the pictures but, presently I am at home.

He, however, queried the claim by the Oyo state government that there is peace in the state.

Public Relations Officers of the state police command, Adekunle Ajisebutu who confirmed the incident to journalists, however, insisted that normalcy has returned to the affected areas.

Ajisebutu in a statement added that eleven suspects including their leader have been arrested.

He said, “Normalcy has been restored in the affected area. The state Commissioner of Police, Abiodun Odude, has directed the policemen drafted to the area to carry out intensive patrol as well as 24 hours surveillance to avoid further breakdown of law and order.

“While directing that the 11 suspects including their ring leaders arrested be charged to court immediately after conclusion of investigation, he warned hoodlums and other criminal elements against wanton destruction of lives and property”.