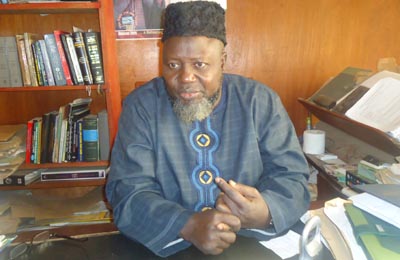 He accused Obasanjo of engaging in sensationalism which he said had been his stock in trade for the past 30 years.

The communications minister, while addressing State House Correspondents in the Villa Monday, said it did not lie in Obasanjo’s mouth to tell Nigerians who they should vote for.

His words, “Obasanjo, as a Nigerian has the right to hold an opinion. If Obasanjo holds an opinion that Mr. President has performed less than it should be, those of us who are in the position to know better has a right to also state the other side which perhaps Obasanjo is ignorant of.

“You see, they are some people who enjoy engaging in sensationalism. With due respect to General Obasanjo, if you take his history over the last 30 years, there is hardly any regime other than his own that he did not criticize except Sani Abacha, who didn’t wait for Obasanjo to criticize him before he was sent to the gulag.

“So many Nigerians know that Obasanjo enjoys this type of sensationalisation. In any case, no matter what impression you have of me, do you have a right to tell me not to contest an election? I mean we should talk like people who are educated, who know our left from the right.

“There are procedures for elections. President Buhari is a member of the APC and the APC has its rules and regulations as to how candidates will emerge, if members of the party feel that the president has not performed well enough, it is for them to show that during the primary election. Is not for anybody to short change Nigerians and prevent people from offering themselves for an election.

“In any case, since Obasanjo is no more a member of our party, with due respect to him, it doesn’t lie in his mouth to tell us who among our party members or leaders to contest or not to contest. I think Nigerians should concede this privilege to we members of APC to decide the fate of Mr. President when the next round of primaries come.”

The minister also accused those who have lost out totally in the current administration now resorting to blackmail to achieve their selfish aim.

“I consider it a matter of patriotic duty to interact with you on a number of issues that have been trending, particularly in the south west and generally in the country. As somebody who has been in this government for almost two years, I believe am in a position to know what true achievements of this government are.

“Ironically it looks like we have not been talking because we believe in modesty, we do not believe in propaganda. Unfortunately enemies of this government, particularly people who perhaps feel they have lost out in the new dispensation have been churning out false information, blackmail and all kinds of baseless accusations, particularly of non-performance of the government.

“I am talking here not as the spokesperson of the government but as an individual, a leader of APC from Oyo State who also is a member of this government, having been minister of communications.

“I believe as an active participant in political and governmental affairs I have a duty to the government and to myself and I believe to all Nigerians that we have to correct a lot of misinformation and blackmail that is out there by people who ordinarily deserve respect but who for reason of clanishness, for reason of tribalism, for reasons of religious bigotry and intolerance have decided to see and not to ask questions about what is going on in the country.

“I have always challenged everybody who cares to listen that what this government has done in a number of areas, particularly in the agricultural sector, in works, housing and power sectors, the PDP government never achieved that in the 16 years of their reign.

“It is true that the constitution and the electoral law talk of campaigns starting 90 days before elections, but there is no law stopping announcing intentions. There is a difference between campaigns and intentions,” he said.

He said the event in the south west was not a campaign event but the opening of the South West Zonal Office of the Muhammadu Buhari/Osinbajo Dynamic Support Group.

“What is more important is that it also afforded us an opportunity to lunch a booklet titled ‘a compilation of the achievements of the Buhari administration’, so that Nigerians will have verifiable facts in hard copy in their hands.

“So, I plead not guilty to the issue of starting campaign before time. The best thing we could say is that it has been a pronouncement of an intention.

“The man himself has not declared but we are saying we will persuade him to declare his intention at the appropriate time and we are going to support him.”