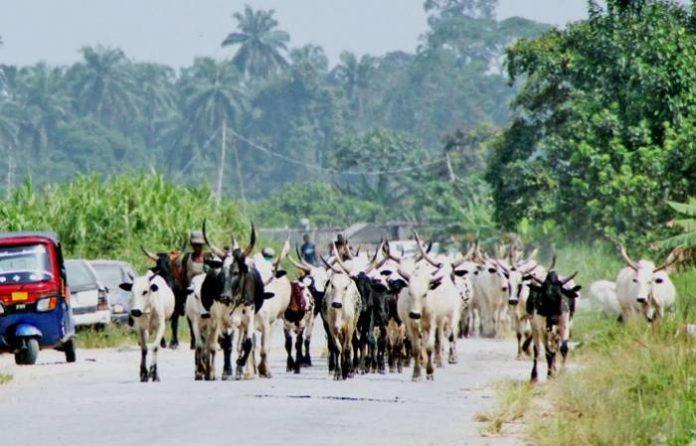 Law scholars have asserted that the raging fire caused by killer herdsmen, who have been attacking people in farming communities, could only end through political action and not the present fancy of enacting anti-grazing laws.

This was the outcome of the deliberations of law scholars at the conference organized by the Faculty of Law, Ahmadu Bello University, Zaria, with the theme “Promoting Peace, Security and Human Rights; Curbing Unsavory relationship between herdsmen and farmers in Nigeria.”

One of the speakers and Special Assistant to President Muhammadu Buhari, Prof A. K. Usman, in his presentation, observed that present conflict would have been averted if there was a law enacted to regulate the operations of nomads without necessarily looking at the socio-cultural and religious identity of the Fulani herdsmen.

His words: “It sad that today the crises has taken a new dimension since the introduction of grazing law in some states, forgetting that fact the Fulani are not the only nomads, there are many other tribes in Nigeria that engage in cattle rearing business.”

According to him, there is nothing wrong with the enactment of law on grazing but how the law is made and its intension determine what to do and how the nomads and farmers would live peacefully with one another.

“To my understanding, there is no way people should live without law, otherwise anarchy will take over. There is no way government would allow innocent lives to be lost unnecessarily,” Usman said, noting that the crisis had gone beyond the issue of herding cattle. He said that issues like deliberate use of ethnicity and religious sentiment had been introduced intentionally to upset peaceful coexistence.

He explained further: “I believe the crisis requires legal solution, there is need to look into our laws with focus on land, and find alternative ways of ensuring peace between nomads, farmers and the people.

Special Adviser on Legal and Constitutional Matters to the President of the Senate, Prof. Nuhu Jamo, argued that the entire crisis including the menace of killer herdsmen has been economically motivated from the onset.

“I am a Fulani man, and I know how a Fulani man reacts when it comes to his wealth. The Fulani entirely depend on cattle and as such they resist anything that touches their life.”

He said that since the economy is the central issue of the crisis, the only solution is to adopt political and economic approach in resolving the conflict.

“I strongly believe that political and economic instrument can lead to lasting solution more than legal instrument especially as the conflict has taken political and religious dimension,” Jamo said.

In his paper titled: The legal and pragmatic missing link in the protection of civilian in sporadic riots, attack and other situations of violence: the Nigerian Challenges, Dr. Ahmad Jibrin Suleiman of the Faculty of Law, Ahamdu Bello University, Zaria, described the herdsmen/farmers conflict as one of the oldest conflicts that exist across some African countries especially Northern Nigeria. He said the conflict is like other crises that claim lives of people, which have grown out of negligence and carelessness of the authorities.

According to him, the major reason for the escalation of this conflict was the failure of government to punish the perpetrators of the atrocities, accountability for irresponsible military and other security officers as well as non-guarantee of justice for the victims.

Suleiman said lack of early and timely intervention in any crisis by security agencies is responsible for the consequent damage and toll of casualities including death and injuries.

He recommended the adoption of what he called early warning and rapid response mechanism as the best way for protection of civilians riot and other situations of violence.

“There is need for solid synergy between traditional rulers, establishment of civil society organizations like West African network for peace building.”

Chief of Army Staff, Lt. General Buratai, who was represented by Major General Victor Okwudili Ezugwu, identified the herdsmen conflict as a global phenomena that mostly affects the Africa sub-region and has been one of the major factors responsible for the economic down turn of many countries.

He attributed the following factors as the remote causes of the conflicts: competition for scarce resources, urban development, climate change, environmental degradation characterized by desertification and extreme drought.

Other major factors he enumerated include increase in cattle population, lack of acceptance of the herdsmen by host communities, destruction of farmers’ crops by the headers as well as method of judicial adjudication.

Buratai said the crisis has effected the socio-economic situation of the country, especially in the area of proliferations of arms, escalation of the conflict into religious and political crises, reduction in farmers output, leading to increase in the prices of foodstuff and displacement of farmers and herdsmen, among others.

He suggested that there should be a joint reconciliation committee between herdsmen and farmers at local level, revitalization of cattle grazing routes, arresting desertification by deforestation, bridging indigene-settler syndrome as well as holding regular town hall meetings to address this problem.

National Secretary of Miyetti Allah, Malam Baba Othman Ngelzama, who presented the position of the group lamented over the frequent castigation of Fulani nomads for killings of innocent Nigerians, which he characterized as a conflict generated to achieve political goals.

He said the herdsmen/farmers conflict is an old crisis not only in Nigeria but in most countries in Africa, noting that contributions of herdsmen to the economy of Nigeria cannot be measured in small quantity.

“It estimated that more than 250 cattle move to southern Nigeria daily with 200 cattle being consumed in Lagos everyday.

It is sad that today, the same herdsmen are called terrorists or criminals by some selfish ethnic chauvinists,” Ngelzama said.

“This is the fundamental factor that triggered off the ongoing conflict between farmers and herdsmen,” he said.

In his contribution, the Kaduna State Chairman, All Farmers Association of Nigeria (AFAN), Alhaji Nuhu Aminu, said that farmers/nomads conflict could be solved if government really wanted it solved.

“We have already had series of meetings over this issue and recommended what should be done but yet most of our recommendations have not been implemented,” Aminu said.

He argued that the law on cattle routes and grazing land reserve arrangement is still in place adding that both Miyyetti Allah and AFAN have agreed to that, noting, “So I don’t see any reason for the conflict at the moment except if the issue is politicized.”

He cautioned that the crisis is a time bomb for the Nigerian economy as more farmers had to abandon their farms due to invasion by herdsmen and cattle rustling, both of which are claiming the lives of many farmers across the country. Aminu stressed the need for continued dialogue among stakeholders including state governors.