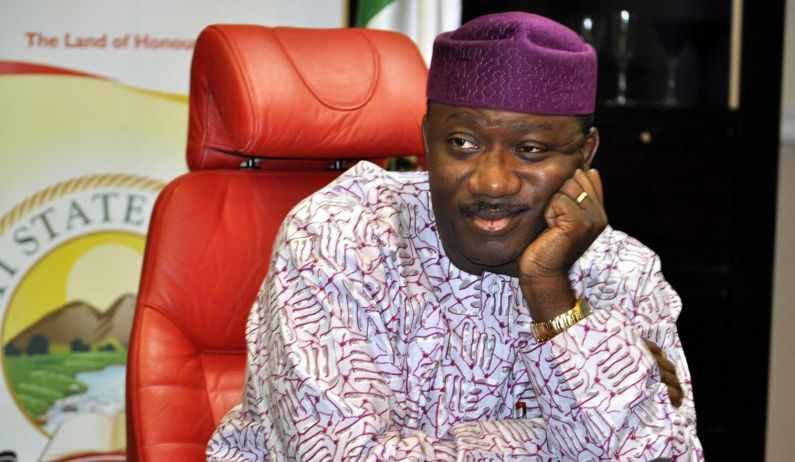 Less than two weeks after releasing a white paper on the report of the Justice Silas Oyewole Judicial Commission of Inquiry into the Finances of Ekiti State during the administration of the Minister of Mines and Steel Development, Dr Kayode Fayemi as governor of Ekiti State, the State government has filed criminal charges of corruption against Fayemi and his Finance Commissioner, Mr Dapo Kolawole.

The 19-count charge HAD/05c/2018, in which Fayemi and Kolawole were accused of stealing, abuse of office, criminal contempt, among others was filed before the State High Court, Ado Ekiti on Friday, January 26, 2018.

Fayemi and his Finance Commissioner were accused of misappropriating the sum of N4.9 billion being the proceeds of Ekiti State Bond for the sum of N20 billion earmarked in the Bond Prospectus for various projects in the State that were either not done or partly done.

While releasing the white paper on January 15, 2018, the government had directed that the state’s Ministry of Justice should institute appropriate legal action(s) against Fayemi and others adding that Fayemi and his Finance Commissioner should be made to account for the whereabouts of the fund allocated to projects in the N25 billion Bond Prospectus, which were either not executed or partly executed.

Count 12 of the criminal charge, which bordered on conspiracy to steal and punishable under Section 516 of the Criminal Code law, Cap C. 16 Laws of Ekiti State, 2010 reads, “That you Dr John Kayode Fayemi and Mr Vincent Dapo Kolawole, while holding the offices of the Executive Governor of Ekiti State of Nigeria and Commissioner for Finance respectively, sometime between 2011 and 2014, within the jurisdiction of this Honorable Court, conspired to steal the sum of
N2,750,000,000.00 (N2.75 billion) being the sum of money earmarked in the Bond Prospectus titled; ‘Ekiti State Government of Nigeria, Offer for Subscription of N20,000,000,000 (N20 billion). 14.5% Fixed rate Bond Due 2018 Under the Ekiti State Government of Nigeria N25,000,000,000.00 Bond Issuance Programme‘ and released for the construction of Ultra-Modern Market in Ekiti State, which you never built; and thereby committed an offence.”

“Government views accountability and probity as the hallmark of good governance. Therefore, the government decided to set up the Judicial Panel of Inquiry in line with its law enacted in 2012.

“Both Dr Fayemi and Mr Kolawole are recommended as unfit to hold any public office in the state for their refusal to appear before the Commission of Inquiry. Their disrespect to the constituted authority and the undignified roles they played in the whole contracts saga which were obviously against the interest of the state they were supposed to protect. They should be barred from holding public office for a specified period,” the white paper read.

While submitting its report on December 13, 2017, the Judicial Commission of Inquiry had said that the former governor must account for the whereabouts of a sum of N2.75 billion allocated from the N25 billion bond obtained by the government for the execution of contract for the construction of Ultra-Modern market in Ado Ekiti, which was never executed.

The commission of inquiry also said that the contractor in respect of the furnishing of the government house built by the Fayemi’s administration should be made to refund a sum of N324.8 million, noting that the contract should not have been more than N280 million.

The panel said it found out that KITWOOD Nigeria Limited to which the furnishing contract of over N600 million was awarded had no traceable address and that “the address on the Letter of Award is a virgin land at opposite the new Central Bank along new Iyin Road, Ado Ekiti.

On the purchase of vehicles, the panel said “claim by Coscharis Motors that it supplied 235 and/or 250 vehicles was fraudulent and that fraught with so many contradictions.

“That Coscharis Motors supplied some vehicles outside Ekiti State especially, at Ibadan Liaison office when Ekiti State Government does not have a Liaison office in Ibadan. In respect of this, seven vehicles were supplied outside the State and signed for by unknown persons.

On the controversial N852.9 State Universal Education Board (SUBEB) fund, the commission said it was clear that the Government of Dr Fayemi hoodwinked the federal government into paying its own matching grant by obtaining N852, 936,783.12 loan from Access Bank on November 25, 2013 without perfecting documentation in respect of the loan, thereby flouting the provisions of Section 11(2) of the UBEC Act, 2004.