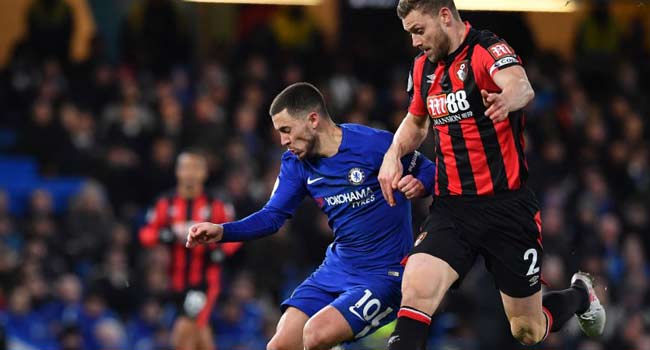 Manchester City are now 15 points clear at the top of the Premier League, following a comfortable 3-0 victory over West Brom on Wednesday night.

Fernandinho opened scoring for Pep Guardiola’s men in the 19th minute, before Kevin De Bruyne made it 2-0 after the break. Sergio Aguero rounded off scoring with a minute left.

Their rivals Manchester United were unable to maintain the 12-point gap, after they lost 2-0 to Tottenham Hotspur at Wembley.

Christian Eriksen scored the quickest goal in Premier League history after only 11 seconds to make it 1-0, before Phil Jones put the ball past David De Gea.

In other games, Bournemouth shocked Chelsea 3-0 at Stamford Bridge, Everton beat Leicester City 2-1, Newcastle United drew 1-1 with Burnley and there were no goals between Stoke City and Watford.