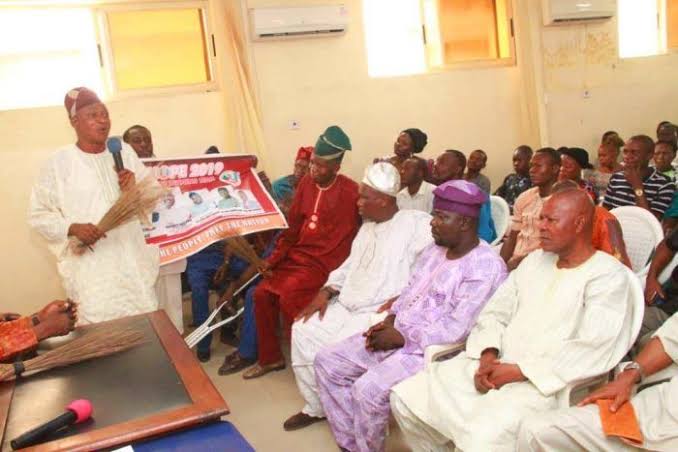 Chairman of the Oyo State chapter of the Action Democratic Party (ADP), Chief Folaranmi Owolabi, and about ten thousand other members of the party on Thursday, dumped the party and joined the ruling All Progressives Congress (APC).

The ADP Chairman and his colleagues joined the APC less than 24-hours to the much+awaited 2019 general elections.

Owolabi announced the defection of the former ADP members at an event held at the APC state secretariat in Ibadan, the state capital.

The former ADP Chairman, while speaking, alleged that he and other members of the party dumped ADP due to overbearing influence of a former Governor of the state and the governorship candidate of the party Chief Adebayo Alao-Akala.

He said that he and other defectors had no regrets taking the action barely 24 hours to the general elections, as he cited neglect of the state chapter by the national secretariat of the party, which they claimed had made them vulnerable, as part of their reasons.

Owolabi while speaking further vowed to mobilize other defectors to campaign vigorously for the victory of the Oyo South Senatorial District candidate of the APC, Governor Abiola Ajimobi; state governorship candidate, Chief Adebayo Adelabu and other APC members.

He claimed that the ex-governor had disrupted all the arrangements he met on ground. He added that he was able to mobilize over ten thousand members of the ADP to the ruling APC because they had always seen the ruling party as better coordinated, fair and just in the way it handles issues involving members.

Owolabi said, “Up till yesterday (Wednesday), I was the Oyo State chairman of the ADP; but, by the grace of God I and more than 10,000 members have dumped the ADP and we are now fully in APC.

“We were the foundation members of the ADP since the last two years. We nurtured the party to become a force to reckon with in Oyo State politics, which is what attracted the likes of Otunba Alao-Akala to come and join us. But, sadly, up till yesterday the national secretariat has never bothered about the welfare and upkeep of the state chapter of the party. No moral or financial support so far.

“We have been using our goodwill to nurture the party, but immediately Otunba Alao- Akala joined us last October he scattered everything. He disrupted the structure he met on ground and he cleverly snatched the party from us. Some of our members that had obtained forms to contest the state and National Assembly elections were shocked when he came and used his overbearing influence to snatch the tickets for his cronies contrary to his earlier promises.”

Adeyemo, who received the defectors on behalf of the state chairman of the party, Chief Akin Oke, urged the defectors them to go back to their wards and spread the gospel of better governance, which he said that the ruling party represents.

Adeyemo said, “I am happy that you realized that you have been in a wrong place. I don’t know how a party like ADP can withstand a party like APC that is in control of the federal and Oyo State governments. Even the PDP cannot withstand the heat. We are promising that your interest will be adequately taken care of. At least Alao-Akala contested against us in 2015 and lost. And when he joined us in the APC we did everything possible to satisfy him, but he left. Today he has gone to political oblivion.

“Go back to your wards and spread the good news. Go and campaign for the APC and ensure that we win the presidential, governorship and other elections in your domains. All that is due to you will be given to you without any prejudice.”