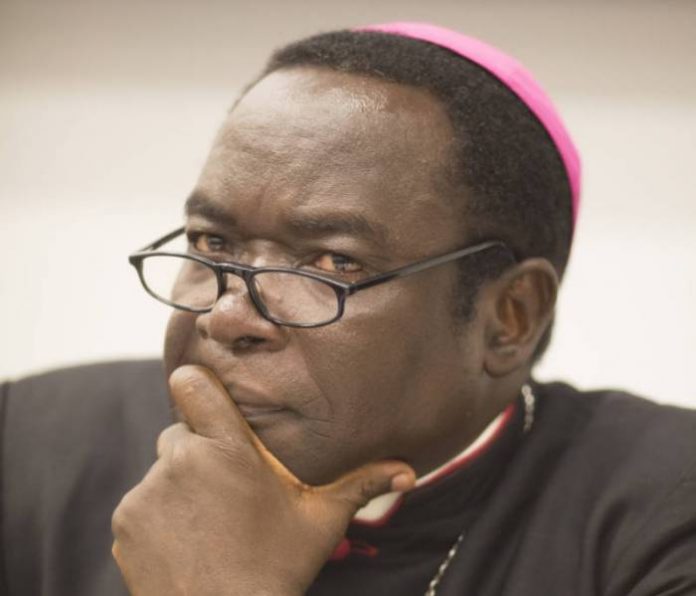 The Muslim Rights Concern has kicked against the plan by the Bishop of the Catholic Diocese of Sokoto, Rev. Mathew Kukah, to train 10 million almajiri children in Northern Nigeria.

In a statement issued on Wednesday, MURIC claimed that Kukah’s idea raises more questions than answers.

The human rights group described Kukah’s proposal as a ploy for proselytisation, modern colonialism and a potential time bomb.

The statement was signed by Prof. Ishaq Akintola, Director and Founder of MURIC.

The statement said: “We all agree that something must be done about the almajiri children. We can welcome ideas from everyone but the implementation must be in the hands of Muslims in the region. Any other thing will make the intention questionable. We cannot pretend to be so naïve as to entrust our Muslim children to the hands of Christian gospellers. As far as we are concerned, Kukah’s almajiri dream is a Trojan horse.

“These children have teachers even if the system is unconventional. The parents entrusted them to the teachers and learning still takes place somehow. The devil we know is still better than the one we do not know and we expect Rev. Kukah to know better. Can any Christian community allow an Islamic organization to take their children away just like that? What is the fate of the children taken from Chibok to an Edo IDP centre in 2014?

“Whatever the situation may be, we wish to caution Northern Muslims, particularly the elders, never to allow it to happen. Instead of allowing Christian missionaries to seize this kind of initiative, Northern Muslims should empower available Muslim NGOs to cater for almajiri children.

“We know from experience that whatever happens will be a point of reference in the near future. Who will bear the shame at that time? We therefore advise state governments in the region to rearrange their priorities and concentrate on the education and welfare of almajiri children.

“One indisputable fact is that almajiri is essentially a system practiced by northern Muslims. It is not part of Christendom from North to South. Is Rev. Kukah telling us that he prefers to alleviate poverty among Muslims to doing same among Christians? Is he telling us that he loves to assist Muslims more than he loves to help Christians? Can Rev. Kukah give any guarantee that those children will remain the same at the end of his intervention? It is modern colonialism.

“When did the reverend father suddenly develop so much love for Muslims that he has now decided to give them preference above his Christian folks? Are there no poverty stricken children in the Christian majority Middle Belt particularly in Benue and Plateau? Why can’t he take his project there? This type of project demands trust. No NGO can successfully train children or adults in an atmosphere of mutual distrust.

“Another question has to do with funding. Who will fund this gigantic project? Our guess is that the fund will come (or has come) from one of those foreign donors. We are sure it cannot be the Nigerian government. This raises another major concern. The foreign donors and agencies are most likely to be from the West.

“Incidentally, Western donors are known for their preference for supporting Christian-oriented non-governmental organizations (NGOs). They dish out huge amounts of money to non-Muslim NGOs while Islamic organizations get pittance, and that is if they get anything at all. That is not to say we are blaming them. We have no moral right to do so.

“But we have every right to stand up against Kukah’s almajiri initiative and question the rationale behind a foreign donor or donors funding a project targeted at Muslim children particularly if the project is to be executed by a Christian organization.

“Are there no Islamic NGOs in the North? We are aware of no less than five NGOs that specialize in eliminating poverty among vulnerable people. In fact, one of them, the AlMajiri Child Right Initiative (ACRI), specializes in almajiri affairs. Is Rev. Kukah unaware of the existence of these Muslim NGOs? What effort has he made to find them?

“This project is repulsive. It has the tendency to portray Muslims as a bunch of unintelligent, irresponsible and carefree people. We cannot allow such a misleading impression to remain just like that. Muslims are responsible people, idealistic, pious, self-satisfied and integrity-loaded. The Glorious Qur’an asserts that we are the best among mankind (Qur’an 3: 110). Every Muslim is born free. We are nobody’s slaves and we bow only to Almighty Allah. We cannot allow anybody to paint us in another colour to the outside world.

“We have reliable information that some of the existing Muslim NGOs have made futile attempts to secure funding for similar projects from foreign donors. Why would the same donors suddenly show interest in funding the initiative of a Christian reverend father while still ignoring those of genuine Muslim NGOs?

“MURIC smells a rat. The Kukah intervention is nothing but a trap. It is also intended to ridicule northern leaders and Muslims. Even now that it has not started, there are insinuations here and there that Northern Muslims are incapable of rescuing the almajiri children and a reverend father has to come to their aid. We are of the strong opinion that there is a hidden derision in this.

“We caution foreign donors to desist from exploiting our predicament. We know about giving people fish to feed them for only one day thereby enslaving them forever. But we also know about teaching people how to fish thereby feeding and emancipating them for a lifetime.

“We invite foreign donors who are genuinely interested in helping the almajiris to do so through Muslim NGOs. This Kukah intervention is a time bomb. It is calculated at swinging the population pendulum in terms of which faith controls the North in the next twenty or twenty five years.

“Christianity came to the South in the 19th century under the guise of Western education. Thousands of Muslims in the South-West were forcefully converted to Christianity in Western schools. Such a plan could not work in the North. The next target of the hot gospellers is the North and the weapon is going to be money. The West is pumping huge amounts of money into Christian movements in the North.

“On the contrary, the same West has subjected Islamic organizations in Nigeria to financial strangulation under the guise of fighting terror. Through blackmail and use of force, all Arab donors have been neutralized by the West. This has been happening for the past fifteen years. What kind of game is the West playing and how do we expect the Muslims to keep quiet when projects like the Kukah almajiri intervention come up? How do we start seeing the foreign donors as people who have good intentions for us? How can we trust those they sponsor? How can we trust Rev. Hasan Mathew Kukah?

“Is Kukah aware that another way of looking at the almajiris is to see them as Islamic students? Why would the teachers and parents look on while the Kukah initiative lasts? There is therefore every possibility that the initiative may lead to religious crisis midway.

“To secure the confidence of Northern Muslims, Kukah should put his cards on the table. Who are the donors? How much are we looking at? What is the time frame? This project is not transparent enough. It is an attempt to blindfold Northern Muslims while their children and Islamic students are taken into spiritual slavery under the guise of economic and educational assistance. Nigerian Muslims have seen enough from their Christian neighbours to make them wary of ‘generous’ offers.

“As we draw the curtain, we suggest that Kukah should take Muslim NGOs in the North into confidence. He can co-opt some of them into a committee, allow them to do the implementation while he and the donors monitor the use of funds for the project. Whatever training the almajiri children receive should include the learning of Arabic language and Islamic studies. Anything short of this is unacceptable.”