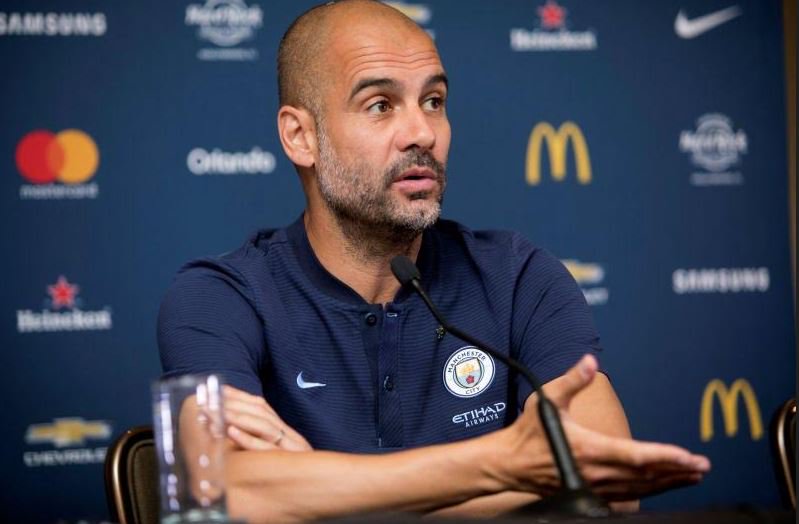 Manchester City manager, Pep Guardiola has spoken ahead of his side clash with Manchester United in the Premier League on Saturday and the Champions League quarter final second leg clash with Liverpool on Tuesday.

The former Barcelona coach said the door is still slightly open for Manchester City in the Champions League, adding that he will rotate his squad for Saturday’s match against United.

A victory over United at the Etihad Stadium will ensure Guardiola his first Premier League title since he arrived at City in July 2016.

City are on the brink of going out of the Champions League after being beaten 3-0 by Liverpool in their quarter-final first leg at Anfield last Wednesday.

The Spaniard, at a press conference on Friday, said: “It’s a different competition. We are thinking about recovering the players, about playing in front of our fans, creating a good game to put them under pressure.

“They’re almost qualified but we have 90 minutes. The door is almost closed but a little bit open and maybe there is some space for us to get in.

“It was a tough result on Wednesday. It will be difficult on Tuesday but we are going to try. We will have our chance, but we have such an important game before that. I reviewed the game and Liverpool played like they always do at Anfield.

“In the last 15 or 20 minutes of the first half, they were much better than us. In the first 25 minutes and the second half, we played a good game.

“We have three massive games – United, Liverpool and Tottenham,” he said.

“We have just a few days between each game. We have to see the condition of the players.

“We will have a training session and we’ll speak with the docs and see what’s the best team. We’ll pick a team to win the game against United. We are going into it to win it. We have one eye on Tuesday though.

“Tomorrow no matter what happens, we’ll have six more chances. Everything is an influence, but I’d rather be facing United with a better result than we had. We must adapt, though. The result against United will help emotionally to prepare for the game on Tuesday.”