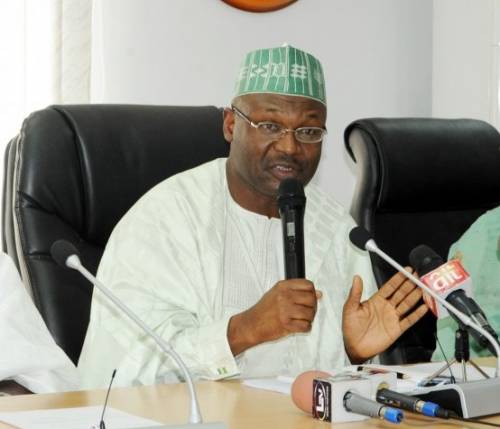 The Advocacy for Integrity and Economic Development (AIED) has called on Professor Mahmood Yakubu, Chairman of the Independent National Electoral Commission (INEC), to tender his resignation letter immediately.

AIED made this demand in a press statement issued on Friday and signed by its Director of Publicity, Comrade O’Seun John.

The statement was a response to reports that Amina Zakari, said to be a niece of President Muhammadu Buhari, has been named as chair of the core committee to co-ordinate the collation of results of the general election.

According to AIED, the appointment is the “final straw” in what has already been a “partisan relationship between the expected independent commission and the government in power”. The group said if Yakubu decides to be unpatriotic and delay his resignation, “it is only manly of him to then issue a certificate of return to President Buhari and forgo the plan of wasting huge resources and precious time in conducting any election.”

The statement read: “What we have witnessed today in the appointment of Amina Zakari by Mahmood Yakubu is the final straw in what has been a partisan-laden commission. INEC as we know it no longer exists. Instead, it has become another arm of the Presidency and the ruling party with the Chairman of the commission taking orders from the office of the Chief of Staff.

“The neutrality and unbiased standing of INEC has been eroded with the appointment of a blood relative of a major contender into a pivotal role for the presidential election.

“But this is not the only crime of the Mahmood Yakubu-led tenure. Rather, it is one of the many steps toward rechristening the commission into a ‘Buhari Electoral Commission’. We all witnessed the abysmal defence of constructive criticism by the media aide of the chairman written in tenses that suggest it was crafted by Lai Mohammed and only passed to INEC for signature.

“We also witnessed how INEC, in spite of the international and nationwide condemnation of the electoral fraud disguised as election in Osun gubernatorial election, defended the gigantic antidemocratic process and allowed same to stand. It is with these evidences that we strongly believe that an INEC under the leadership of Mahmood Yakubu cannot conduct a free, fair and transparent election, and thereby demand that he tenders his resignation letter. Doing otherwise will only interpret to a presidential election determined before it commence.

“If Yakubu decides to be unpatriotic and delay his resignation, it is only manly of him to then issue a certificate of return to President Buhari and forgo the plan of wasting huge resources and precious time in conducting any election.