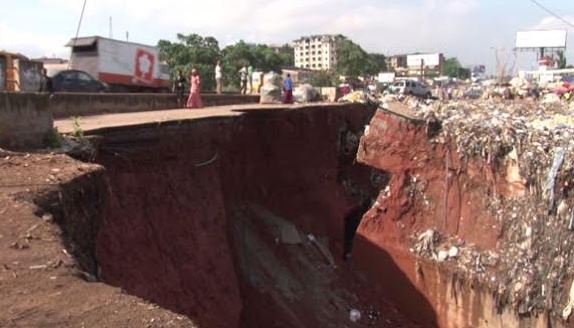 A gully erosion site that has cut off many road outlets behind the NNPC mega station in Asaba, Delta state, reportedly killed three persons on Sunday, while thirteen houses within the area caved in and were destroyed.

It was gathered that the three victims, aged 18, 21 and 22, in their attempt to cross to where they would board tricycle to their destination, fell into the deep cut hole and before rescue could come their way died.

An eyewitness, Jane Eyeh, told DAILY POST that the victims were found dead inside the gully created by the erosion in the area, adding that they fell into the deep hole through local bridge, constructed over the hole, adding that “before rescue came their way, they have died”.

Investigation revealed that whenever it rained, buildings within the mega fuel station were either submerged in great pool of flood or left close to the fast caving-in deep gully that are daily expanding in width and in dept.

Although, there had been no rainfall in the last three days, the situation of the menace in the area leading to Okpanam community, has caused untold havoc especially the destruction it has wreaked on the residents and their property.

A resident of the area, Pastor Willie Abraham, who spoke to DAILY POST, said: “the dangers the erosion menace has caused to us here, all houses might soon cave in. It has destroyed many houses, and just on Sunday three persons died while trying to cross the locally-constructed bridge on top of the deep cut hole on the erosion-destroyed land. We are appealing to the state government to come to our aid”.

Further investigation revealed that the residents’ only access road to the school of midwifery was also in deplorable condition as the erosion site is currently fast encroaching on NNPC land from behind.

In a swift reaction, the state Commissioner for Environment, Barr. John Nani told DAILY POST that the state government was committed to ensuring that the erosion menace in the state becomes a thing of the past, adding that: “it is unfortunate that some persons died in the process of crossing the local bridge on top of the erosion-devastated land. It was certainly a risk, government sympathizes with the families of the victims, and warns the people in the area against such risk”.