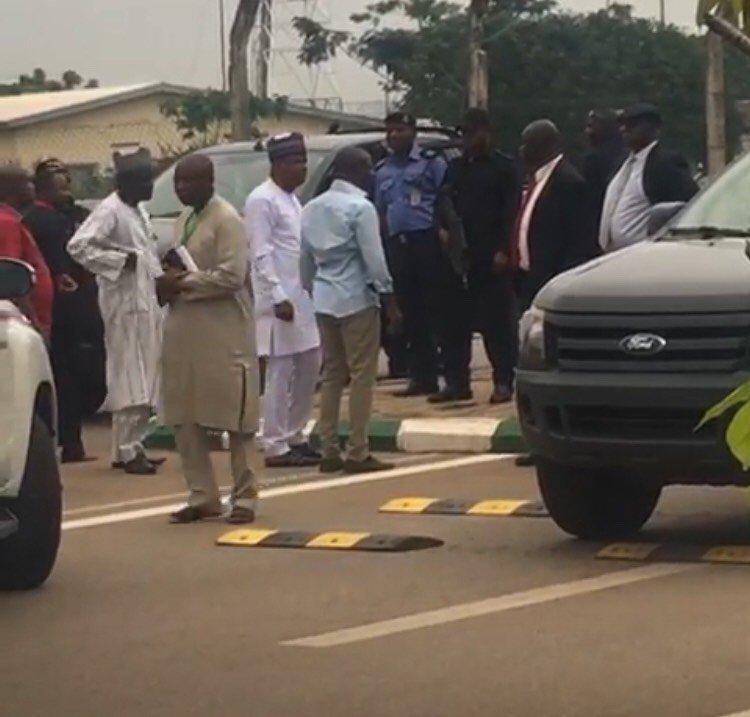 Senator Rafiu Ibrahim, Tuesday morning at the National Assembly entry, confronted the Department of State Services (DSS) for blocking entry and exit points to the complex.

At 7:10am, Ibrahim, was denied access into the premises by officials of the DSS.

Angered by the development, the lawmaker asked the operatives “Has the military taken over?”

But the operatives said they were in no position to talk.

Ibrahim then replied: “So who is in the position? What is the issue? You’re here blocking us from going in.”

Currently, there is confusion and gridlock at the entrance of the country’s legislature.

The development is alleged to be part of the plot to effect a change of the Senate leadership.

No fewer than 30 Senators had allegedly gathered in the wee hours of Tuesday morning to finalize plan to impeach against Senate President, Bukola Saraki and his deputy Ike Ekweremadu.

A source told DAILY POST that the alleged meeting was held around 12:30am in Abuja.

The lawmakers were said to have allegedly met with Mamman Daura, DG of the DSS.

The source added that as part of the plot, Senate Leader, Ahmed Lawan (Yobe North) will be picked as Senate President while Hope Uzodinma (Imo West) will emerge as his deputy.

DAILY POST had reported that Saraki and Dogara fixed an emergency meeting for 12:00 noon on Tuesday at the National Assembly.