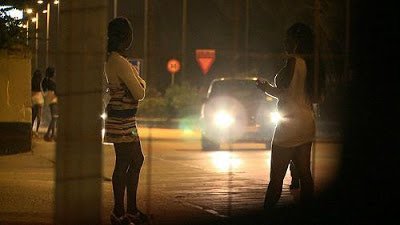 A suspecting husband (names withheld) has caught his wife who just delivered a set of twins in alleged act of prostitution along the popular Enerhen junction, the commercial nerve center of Warri, Delta State.

It was not clear if the lady, who just delivered twins about two months ago, was already involved in the unholy business before she got married to her hubby.

The lady, who hails from a suburb near Warri metropolis, created a scene when she was caught by her suspecting husband, who trailed her to her mother’s house from where she dumped the two-month-old twins and took a bus to Warri to hunt for customers at the popular Enerhen junction, unaware that her husband was just a pole behind as she journeyed to her hustling ground.

Findings by DAILY POST revealed that the lady has been sneaking out of her matrimonial home, under the pretence of visiting her aunt, to ply her sexual trade at Enerhen junction until she got pregnant and delivered the twins.

This time around, she left the house under the pretence of visiting a friend indebted to her in Warri with a promise to returned by 6am the next day.

The said husband was surprised when he eventually saw his wife arrive Enerhen junction, changed dresses to highly skimpy ones for the commencement of her prostitution work at a very cheap rate.

The husband quickly dashed to the Enerhen Police station and returned with some police women to effect the arrest of his almost nude wife.

It was also learnt that the parents of the lady were sent for by the police to come with the twins to meet their daughter face to face clad in her prostitution regalia.

Shocked, the lady’s mother confirmed that her daughter usually leaves her husband’s house to Warri several evenings even before her delivery but never for once thought that she was rushing to Warri for sex trade.

A Police source, who craved anonymity, told our correspondent that the lady who was detained for three days, was bailed by the same husband because of the kids who seriously needed their mother’s attention.