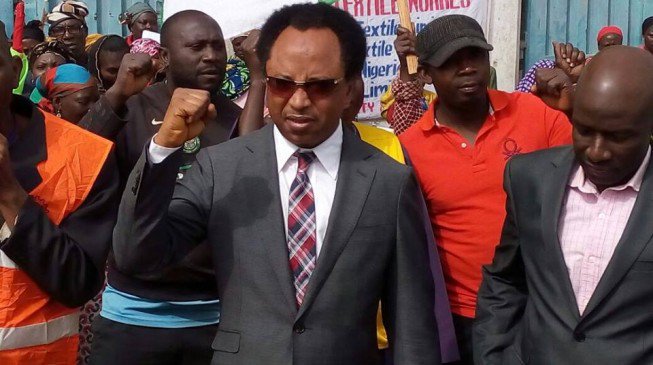 He also appealed to relevant government authorities to intervene in the matter to ensure fairness and justice.

DAILY POST recalls that Hamadada was arrested by men of the 1 Mechanised Division of the Nigerian Army in Kaduna on Tuesday 30th January.

Addressing a press conference at the Nigeria Union of Journalists (NUJ) secretariat in Kaduna yesterday, Balele told Journalists that his brother was not a criminal and had not killed anybody in the state.

He added that his brother was wrongly arrested by the army and now under the detention of the criminal investigation department of the Kaduna Police command.

“My brother, Bashir Hamadada is an Islamic teacher with a private school and he is a Personal Aide to Senator Shehu Sani on Islamic Matters. As far as we know, he is not a criminal. We don’t know why he was picked in the first place,” he said.

Abdulkareem, explained that Bashir who is asthmatic and diabetic was “first abducted on the 8th December, 2017 by some men dressed in army uniform on a Hilux vehicle and they dragged him to a place called Kakau, on hearing it I rushed to Sabo Police Station to report the incident.

“After serious efforts by the police to help us without any result, six days later precisely on the 14th December, 2017, we got a call from 1 Div, telling us that Bashir is in their custody and that we should come and get him.

“When we got there to find out the allegation against him, they told us it was a case of mistaken identity then we took him to the hospital, because he is a diabetic patient and has not taken his medications since his adoption.

“Few days after his release, Bashir was holding a meeting with Kaduna South indigenes at Sheikh Dahiru Bauchi Mosque on the way forward for Kaduna South then we heard someone shouting that Bashir’s car was being vandalised outside.

“Again we reported the case at Tudun Wada Police Station and we had witnesses who were there to testify but nothing has been done about it as we speak.

“To our greatest surprise, in the early hours of Tuesday, while we were standing outside, three Hilux vehicles with about 20 men with army uniform surrounded us and they came out and told him they are there to take him away; when he requested them to identify themselves, they refused to show their identity card but said they are military men.

“They dragged him into the vehicle and asked me to move away, when I asked where they are taking him to, they said 1Div without any further explanation.

“At about 7:30pm on Wednesday, 31st January, 2018 we got a call from the State Criminal Investigation Department (CID), that he has been transferred to State CID, but we are yet to know why he is being harassed like that.”