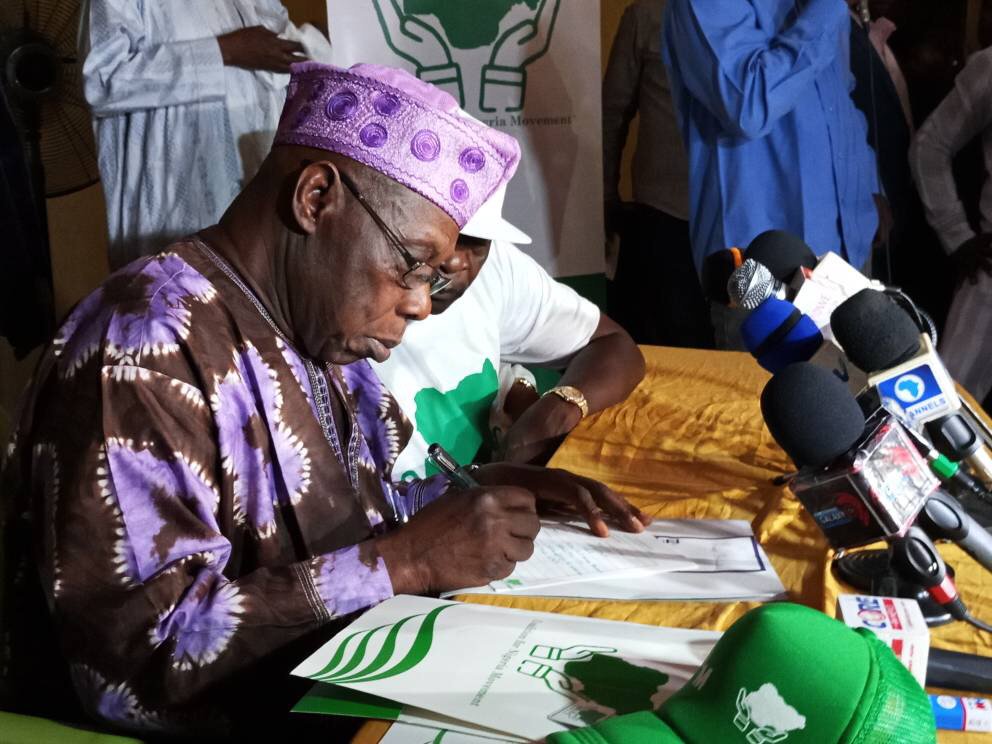 Obasanjo speaking at the secretariat of the Nigeria Union of Journalists, NUJ, Abeokuta said the coalition was a movement of the people to defeat the All Progressives Congress (APC) and the People’s Democratic Party (PDP) in 2019 nationwide.

Some Nigerians have condemned Obasanjo, saying the group was a strategy by the former president to rule Nigeria.

They described it as a group of shameless corrupt politicians and thieves.

However, others with contrary opinion threw their weight behind Obasanjo, insisting that the All Progressives Congress and the Peoples Democratic Party needed to be removed from government.

@ajibola Hmmmmmmmm. one chance. Although it will be a check to the APC and PDP. I love it. we need good government. Those cabals would seat right and reduce their excises.

@ajibola “Selfish agenda.. OBJ and his coalition, get it right, Nigeria project is beyond your political jamboree. You are part of the epidemic.

@benjamin binjchan Third term through the back door is loading. As for me i will support this coalition cos this situation in this country now need prayer nd some leader to correct PMB errors.

@emmanuelloka ” We are all waiting for his coalition at the polling units comes 2019.For me and my households,our PVC is for Buhari if he seek reelection or any APC candidate. I’m tired of Obasanjo antics of turning Nigeria to be place that,he’s the only qualify person to dictates it political direction.

@moses ejovi ” If this will help stop the hardship, suffering and hunger and the massive killings of farmers and innocent people by herdsmen… If this will stop the destruction of farm land and burning of farms by herdsmen is a welcome development.

@henryembassy “Obasanjo who accused Mr president to go and rest is registering himself in a political movement,Nigerians know the truth, APC till 2023.

@austinbliss I would rather vote for Obasanjo’s coalition candidate than to cast my vote for insensitive, blood letting, economy destroyer, nepotistic, despotic PMB. This is the worst regime in the history of Nigeria. A regime that only specializes in inflicting pains on the masses, a regime that values cows more than human lives, a regime that has divided Nigeria along religious and ethnic lines. I think we should be grateful to Obasanjo for coming out to save Nigeria from this sinking ship. We must vote out Buhari come 2019!!

@elsteve chux ” Change of clothes does not change the one wearing it.
Obasanjo is always good at writing letters to any sitting president except himself.He told the whole world just recently that Buhari has not disappointed him.I refuse to be a part of any movement Obasanjo ischampioning.No place for APC and CNN in 2019

@ucheobogu “I am in support of the new coalition group, let’s join hand together and push out all the outdated leaders come 2019.

@moga “Powerless groups can never unseat President Buhari in 2019 but only to waste their time and energy because no amount of threat or false media propaganda can change nigerians mind from voting for Buhari in 2019. Surely#MBuhari remain the best for nigerians if, u don’t like die b4 he take Oath for the second Journey 2019 inshaAllah.

@solomonog “In my own understanding,obasanjo is not contesting any election.its just that,he’s a force that can help to remove buhari from power.the both of them are too old to be president of this nation.how ever,obasonjo is far better than a religious bigot,pretender,wicked,heartless,clueless,tribalistic buhari.i’ ve seen my PVC though,and it’ll work in 2019 have you gotten yours?

@seyi peters “Because OBj is involved, it’s a confirm fraud like APC… Anyway, I know I won’t vote anymore until we restructure cos wetin d next president wan do wey others never do b4?

@lanredembo ” He failed in his first plot on third term. This is another plan for third term in another form. This will fail also. What I expect of him at his age is to unify his family as the children are cry foul

@deleodugbemi “This is a coalition of old thieves who cannot do better than what PDP governments under OBJ and GEJ did from 1999 to 2015, they’re just applying another method that may take them back to government at federal level in order to continue their usual stealing of our commonwealth with impunity.

@umar mohd The coalition to finally finish and put more hardship and create terrorist groups in addition to the present ones in nigeria.We are not behind any coalition created by Obj and group of nigeria looters,we prefer Buhari 2term than any group of thieves and looters

@okonkwo “We are for the coalition to save our country, our future, our children. Delta state support us in support !!

@momoh “This arrangement will surely favour PMB. At least, the coalition movement will share PDP little votes from the South

@obaro “Coalition movement is fraud,criminals like oyinlola are still in the movement,they join so that they can make them president