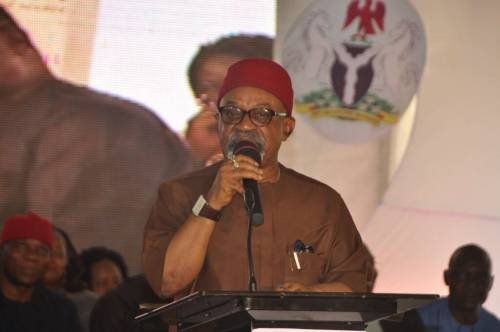 Chris Ngige, Minister of Labour and Employment, says the Nigerian government did not approve N30,000 as national minimum wage as believed.

He stated this at the public hearing on the national minimum wage bill ongoing in Abuja.

According to Ngige, the notion that the government approved N27,000 and N30,000 as the national minimum wage is a misconception.

His words: “I want to clear some misconceptions. The outcry that the government had approved two national minimum wage figures of N27,000 and N30,000 is not true. What the government approved through all the organs — the Federal Executive Council, the National Economic Council and the National Council of State — was for a figure of N27,000 for all workers in the federation of Nigeria.

“However, the Federal Government, based on the principles of ability to pay, augmented their own N27,000 without putting workers through a protracted negotiation to N30,000, which means that the lowest paid worker in the federal public service GL1 Step 1 would earn N30,000 minimum wage.”

He also noted that the government’s figure would not preclude the workers from being paid higher by the employer, depending on the employer’s financial capability.

He added: “We also want to go and say that nothing prevents any employer, who is financially capable either in the public or private sector of the economy, from paying higher than the statutorily prescribed national minimum wage. As a matter of fact, as we speak, the former or well, the prevalent minimum wage now is N18,000, but some state governments, like the governments of Lagos, Edo, Rivers, Delta, Akwa Ibom, some of them are already in the rung of N25,000. Edo State pays N25,000; I’m categorically sure about that one. Therefore, what has been proposed as national minimum wage does not preclude anybody who has capacity to do better than even the Federal Government from doing so and there are many state governments that have that capacity.

“They should be allowed to negotiate with their workers and get to the threshold of N30,000 and go beyond it. Many can go beyond it; Lagos can go beyond it. So, if you even start putting them in a straitjacket, you may end up at the end of the day not making them pay what they are supposed to pay.”