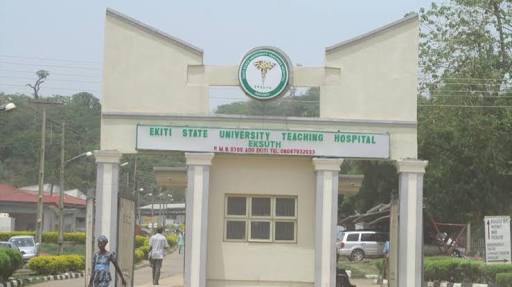 The Chief Medical Director of the Ekiti State University Teaching Hospital, Ado Ekiti, Dr Kolawole Ogundipe, has said the institution’s great challenge has been how to block the menace of high labour mobility in the institution through efficient staff welfare package.

He said the institution was not immune from the economic recession pummelling the nation, which he said made it difficult to get the necessary infrastructure, equipment and personnel despite good subvention from the Ekiti State government.

He also added that the hospital had delivered on the mandate of offering effective service delivery, research and training to ensure efficient healthcare delivery to the people of the state since its establishment in 2008.

Ogundipe said the infrastructural facelift being enjoyed by the institution had led to the approval for residency training by Medical and Dental Council Association of Nigeria (MDCAN) in eight areas of specialties, including: Obstetrics and Gynecology, Family medicine, psychiatry, surgery, internal medicine, Opthalmology, Community Medicine and Paediatrics.

The CMD said this in Ado Ekiti on Tuesday during a press conference marking the 10th anniversary of the establishment of the tertiary institution.

Ogundipe said: “Mobility of labour is high in this hospital even when salaries are paid regularly. Our challenge has always been to employ a medical doctor today and within few months he will move to another place”.

To arrest the situation, Ogundipe said: “We have improved our staff welfare. A minimum of N1m is spent for staff training monthly. Many seminars, conferences and ground rounds are organized to serve as in-house training to get the staff informed, educated and acquire latest skills in practice of Medicine.

“Our staff also enjoy 50% discount on cost of treatment given to them in this hospital to cushion the effect of economic recession while promotion has been done up to 2017”.

Ogundipe stated that the institution had improved infrastructural facilities in Accident and Emergency Unit, built a new theatre unit and procure modern equipment for all the Laboratories to give quality service to the patients.

He said the hospital had built a dialysis and oncology centres to treat those afflicted with kidney infection and cancer, adding that: “patients now receive treatment here rather than traveling abroad for survival”.

The CMD said two outreach centres had been established in Igbemo and Ire Ekiti to take medicare to the grassroots where poor people were predominantly domiciled.

He added that the tertiary health institution had secured accreditation from the National Universities Commission (NUC), to run MBBS in Medicine and Surgery up to the final level, while the School of Nursing under it had got full accreditation for all its courses.

Ogundipe said the hospital now had Echo cardiogram machine to examine those with cardiac problem, while the Opthamology department had made a breakthrough by repairing a retinal detachment in a young graduate of the Ekiti State University.