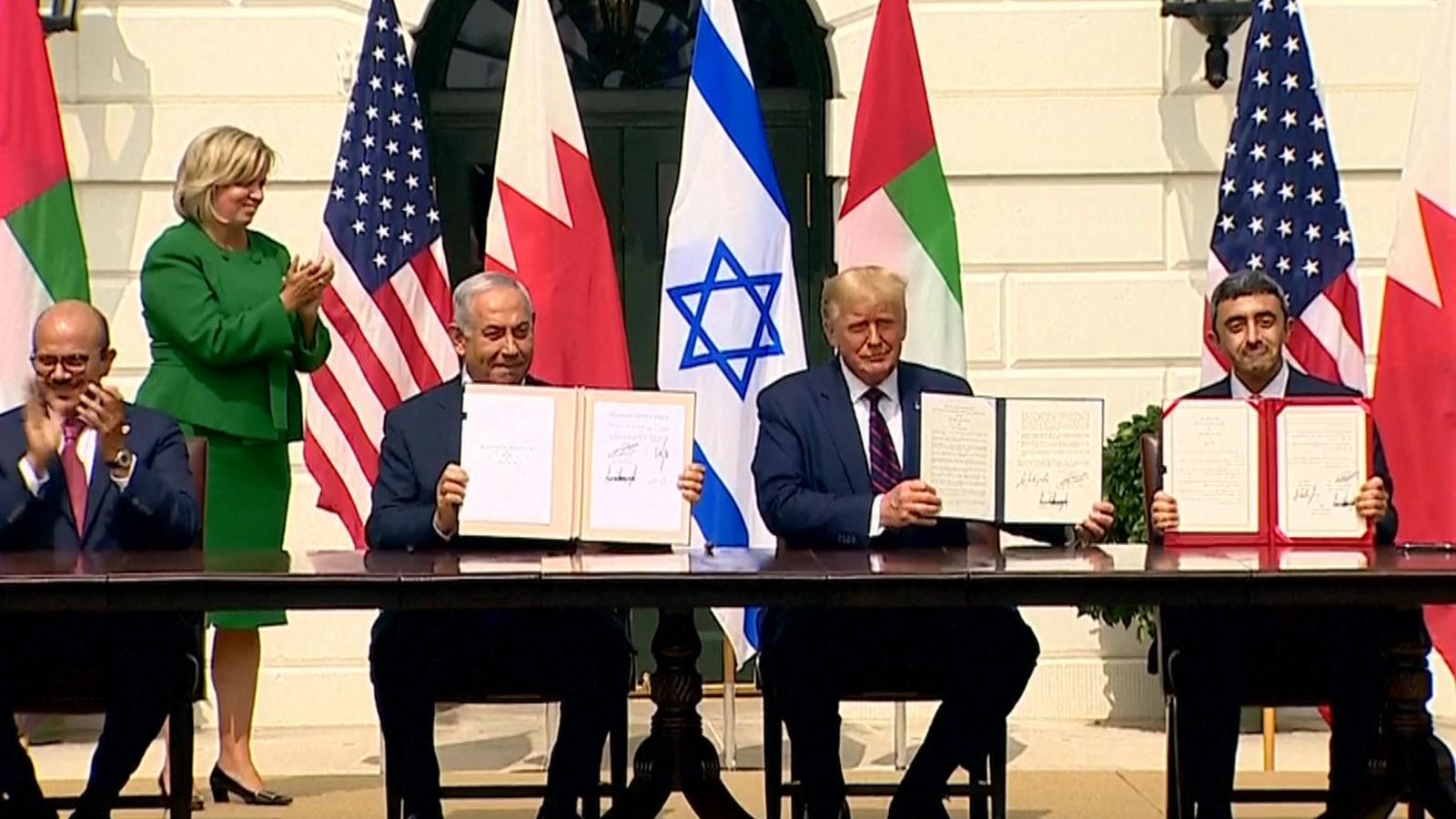 The foreign ministers of the United Arab Emirates (UAE) and Bahrain have signed historic diplomatic normalisation deals with Israel at a ceremony at the White House.
In an event overseen by President Donald Trump, the Emirati foreign minister Sheikh Abdullah bin Zayed Al Nahyan and Bahrain’s foreign minister Dr Abdullatif bin Rashid Al-Zayan signed the accords with the prime minister of Israel, Benjamin Netanyahu.
The agreements, details of which are still being negotiated, represent the first time in a quarter of a century that any Arab country has given diplomatic recognition to the Jewish State. Jordan and Egypt signed deals with Israel in 1994 and 1979 respectively.

Defence ties are also expected to be put in place quickly, with the possible sale of Israeli fighter jets to the Gulf Arab nations.
The deals strengthen the regional alliance against Iran – a common enemy for both sides.

The Abraham Accords, as they have been named, are framed by the Trump administration as a “pathway to peace” for the region and proof of Mr Trump’s credentials as a deal maker.
The images of the signings and the apparent shift in regional alliances they represent are sure to be used by Mr Trump and his re-election team.
There was a clear desire by the Trump administration to conduct today’s ceremony before November’s election. As a consequence, much of the details of the alliances have yet to be finalised.
The UAE, and then Bahrain, agreed to normalise relations and recognise Israel after the Israeli prime minister pledged to suspend plans to annex parts of the Palestinian West Bank.
The move by the Gulf Arab countries breaks a key Arab convention, outlined in the Arab Peace Accord of 2002, that no Arab country would recognise Israel until it withdrew fully from the Occupied Palestinian Territories (Gaza and the West Bank) and allowed the establishment of a Palestinian state with East Jerusalem as its capital.

The Palestinian leadership see the deals as a betrayal.
Donald Trump’s administration and the Israelis say the accords mark a turning point and will prompt the Palestinians to accept the reality of the situation as it is now.

The Trump peace plan for the Israel-Palestinian conflict, unveiled in January, envisages a future Palestinian state but on less land than it currently has, which would not be contiguous, and without East Jerusalem as its capital.
In the hours before the signing ceremony, the UAE minister of state for foreign affairs, Anwar Gargash, told a Zoom briefing with journalists that the Palestinian issue was still a central concern.
He said that a two state solution was still the objective and that his country’s decision to normalise ties with Israel had “broken the psychological barrier”.
He suggested that Arab countries now have more leverage against the Israelis on the Palestinian issue.