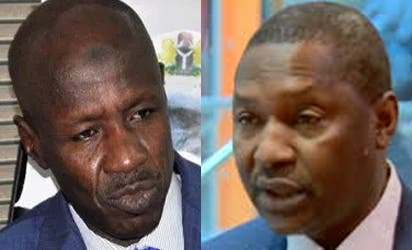 It is no more news that Ibrahim Magu is not in control of the reins of power at the Economic and Financial Crimes Commission, EFCC.

Magu, a Commissioner of Police, held the fort as the Acting Chairman of the anti-graft agency for over five years, albeit without the approval of the Nigerian Senate which twice rejected his nomination to head the agency in a substantive capacity.

Though attempts were made to debunk report of his arrest on July 6 by operatives of the Department of State Service, DSS, however, Magu, remained in detention and was subsequently suspended from his position pending the conclusion of the investigation of allegations levelled against him by the Attorney-General of the Federation and Minister of Justice, Abubakar Malami, SAN.

Both Magu and Malami were appointed in 2015 by President Muhammadu Buhari of the All Progressives Congress, APC, few months after he successfully wrestled power away from then-incumbent President, Goodluck Jonathan and the Peoples Democratic Party, PDP.

Considering that anti-corruption war stood as a major plank of the agenda of the President Buhari-led administration, on November 9, 2015, Magu was appointed the Acting Chairman of the EFCC.

Two days after Magu’s appointment, President Buhari, on November 11, 2015, made Malami the AGF to head the Ministry of Justice.

Statutorily, Magu’s EFCC is under Malami’s purview as the Minister of Justice.

Meanwhile, not long after the first meeting Malami held with heads of all the institutions, did the battle for supremacy and the attendant resistance, began between him and Magu.

At the heart of a prolonged cold war that ensued between the duo, was loot and asset recovery.

Who should be in control of alleged loots recovered both within and outside the country?

Should the loot recovery unit be domiciled with the EFCC or the Ministry of Justice?

Whereas Malami insisted that the Ministry of Justice, being the body that oversights the EFCC, ought to be in charge of all recovered loot, on the other hand, Magu, refused to bulge, being at the helm of affairs of the investigating agency, he preferred to be in charge of the recoveries, admitting to rather keep them in the custody of the Central Bank of Nigeria, CBN.

Magu’s argument was that it was always the practice, wondering why it should change under Malami.

Consequently, Malami and Magu endured a frosty relationship, but continued their in-fighting till the middle of 2017, when the situation worsened.

As Exclusively reported by Vanguard on August 8, 2017, the subterranean cold war between the duo reached feverish heights after Magu shunned request to handover case files of more than 35 ex-governors to Malami.

To hit back at Magu, Malami continued to champion the separation of the Nigerian Financial Intelligence Unit, NFIU, from the EFCC.

The AGF had in a memo marked HAGF/SH/2016/Vol.1/2, urged Buhari to as a matter of urgency, expedite the process of securing autonomy for the NFIU which has been under the control of EFCC since it was established in 2006.

According to section 1(2) (c) of the EFCC Act, it is the NFIU that has “the responsibility of coordinating the various institutions involved in the fight against money laundering and enforcement of all laws dealing with economic and financial crimes in Nigeria”.

The Egmont Group of national financial intelligence units, had at its 24th Plenary that held in China in July 2017, suspended Nigeria for what it termed lack of independence of the NFIU from the EFCC.

The group, at the meeting where about 354 participants representing 112 Financial Intelligence Units were in attendance, anchored its decision to axe Nigeria, for repeated failure to protect confidential information relating to Suspicious Transaction Report (STR) derived from international exchanges, which it made available to the NFIU.

The group, which is the highest inter-governmental association of intelligence agencies in the world, gave Nigeria until December 2017, to comply with its standards on financial intelligence or risk expulsion in 2018.

Following the threat which came whilst President Buhari was on medical vacation, the then Acting President, Professor Yemi Osinbajo, promptly constituted a Presidential Adhoc Committee headed by the Chairman, Senate Committee on Anti-Corruption and Financial Crimes, Senator Chukwuka Utazi.

The mandate of the Adhoc committee included to recommend and facilitate legal and regulatory measures to ensure the financial and operational autonomy of the NFIU, as well to recommend other necessary steps to be taken by relevant stakeholders to ensure the restoration of Nigeria’s membership on the Egmont Group.

Even though Malami initially claimed that the reported rift between him and Magu was blown out of proportion, he immediately launched an Investigation Unit in the Federal Ministry of Justice, with a mandate to investigate “sensitive and important cases”.

Launching the Unit in 2017, the AGF, stressed that weak investigation was a major reason some cases were thrown out by the courts, adding that the Unit would among other things, “coordinate and form part of every investigation in Nigeria”.

He said the move became necessary in view of apparent lack of “legal expertise in the conduct and process of investigations by the various security agencies in Nigeria”.

Malami boasted that the new unit would address anomalies that not only led to frequent loss of court cases by the prosecuting agencies but equally the “consistent rejection of vital/relevant evidence of the course of prosecution and or the writing down of the probative value of such evidence owing to the inappropriate investigation.”

He said: “My office as a result, and in line with the constitutional powers conferred on me as the Chief Law Officer of the Federation and by virtue of section 105(1) and (3) of the Administration of Criminal Justice Act, hereby deems it fit to establish an Investigation Unit within the ministry.

“This unit shall coordinate and form part of every investigation in Nigeria for robust investigation and successful prosecution of such cases.” Expectedly, from the moment the Unit was established, Malami and Magu never saw eye to eye, leading to the extant saga that was precipitated by a petition the AGF sent to Presidency.

In the petition, Malami insisted that Magu was no longer fit to retain his position as the anti-graft czar, accusing him of sundry infractions ranging from the alleged diversion of recovered assets, insubordination and gross misconduct.

Some of the allegations in Malami’s petition which President Buhari handed to the Justice Isa Ayo Salami led the panel to investigate, included alleged discrepancies in the reconciliation records of the EFCC and the Federal Ministry of Finance on recovered funds.

Declaration of N539 billion as recovered funds instead of N504b earlier claimed.

Insubordination to the office of the AGF by not seeking his approval on some decisions.

Not providing enough evidence for the extradition of ex-Minister of Petroleum Resources, Diezani Alison-Madueke.

Not respecting court order to unfreeze an N7billion judgment in favour of a former Executive Director of a bank.

Alleged delay in acting on two vessels seized by Nigerian Navy leading to the loss of crude.

Alleged favouring of some investigators called Magu’s Boys. Reporting some judges to their presiding officers without deferring to the AGF. Alleged sales of seized assets to cronies, associates and friends.

As well, alleged issuance of investigative activities to some media prejudicial to some cases.

Remarkably, since 2007 when the curtain fell on the era of the pioneer Chairman of the EFFC, Nuhu Ribadu, till date, all his successors were equally unceremoniously booted out of office.

Will Magu add a feather to his cap by being the first to be prosecuted? Only time will tell.