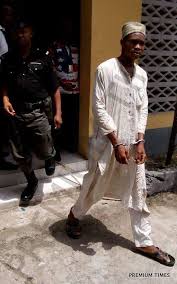 The Personal Assistant to President Muhammadu Buhari on New Media, Bashir Ahmed has come under attack for promising to influence the judgment which sentenced Yinusa Dahiru to 26 years imprisonment for rape.
DAILY POST had reported that a Federal High Court, in Yenagoa on Thursday sentenced the abductor of Eseoghene Rita Oruru, to 26 years in prison.
The convict, Yinusa Dahiru, had in 2015 taken Ese, then 13 years old and youngest child of Charles and Rose Oruru, from Yenagoa in Bayelsa State to Kano State.
Ese Oruru’s abduction occurred on August 12, 2015 at her mother’s shop in Yenagoa.
The teenager, however, rejoined her family after the controversy and had since given birth to a baby girl belonging to Yinusa.
However, on Friday a Nigerian identified as Hammad Yusuf Saleh, had pleaded with Ahmed to intervene in upturning the conviction by the court which he claimed was manipulated.
He wrote, “Please Bashir do something about Yunusa Yellow for Allah’s sake, he is wrongly accused and sentenced, the whole matter is manipulated, we need to appeal for him.”
Bashir who responded in Hausa language said “My brother, I do not have the power to do anything against the judgment of the court, but I will try to contact those whom I think are capable.”
Reacting angrily, Some Nigerians queried why a Presidential aide would promise to influence a court judgment for a rapist and pedophile.
Here are some comments DAILY POST gathered:
@Neyopizzle, “So he is in support of abduction, rape, child abuse, kidnapping, unlawful carnal knowledge of a minor. Wow, right in the heart of the Presidency!”
@Natosinachi, “I wonder what was your intent when you were typing this. You see why people don’t trust the government? And you see why the old men in power always say the young men and women in this country aren’t ready for leadership. It is because of persons like you.”
@HapsonHb, “That is how you defend incompetence, without fact checking the real situation in the country, in the name of pleasing your boss.A time to reap will definitely come hope you will harvest plenty of your deeds.”
@eyeofthegods2, “These goons are one and same: they are either terror or rape enablers. Nigeria is gone to dogs. How can a president aide be assuring a rapist that he will influence the court judgment against him? Let everyone be on notice because the die is cast!”
@ugostevenpasc, “Bashir Ahmed is reminding us that our judiciary is compromised and pocketed by the executive. If he can publicly make such a statement, it should be something to worry about. This is how they overturn judgements.”
@Tutsy22, “Is the PA to President @MBuhari planning to challenge a court judgement against a rapist and a pedo? Who kidnapped and raped a young girl?
@Galileo, “Bashir pls tell those paedophiles clamouring for the release of that kidnapper that; Let girls be girls, not brides.Early marriage is harmful to teenagers.Marriages are not for teenagers.Childhood is not for motherhood.”
@Isiomanb, “Bashir Ahmed didn’t just tweet that out of carelessness believe me, he knew exactly what he was doing.Usurping court judgements, and Executive rascality is a norm in the APC camp.”
@Matooosa, “He who beats the drum for a mad man,is not better either.Men of same orientation, mindsets & irrational being, whose only aim is to oppress & get away with evil acts.”
Related Topics:bashir ahmadEse oruruYunusa Yellow