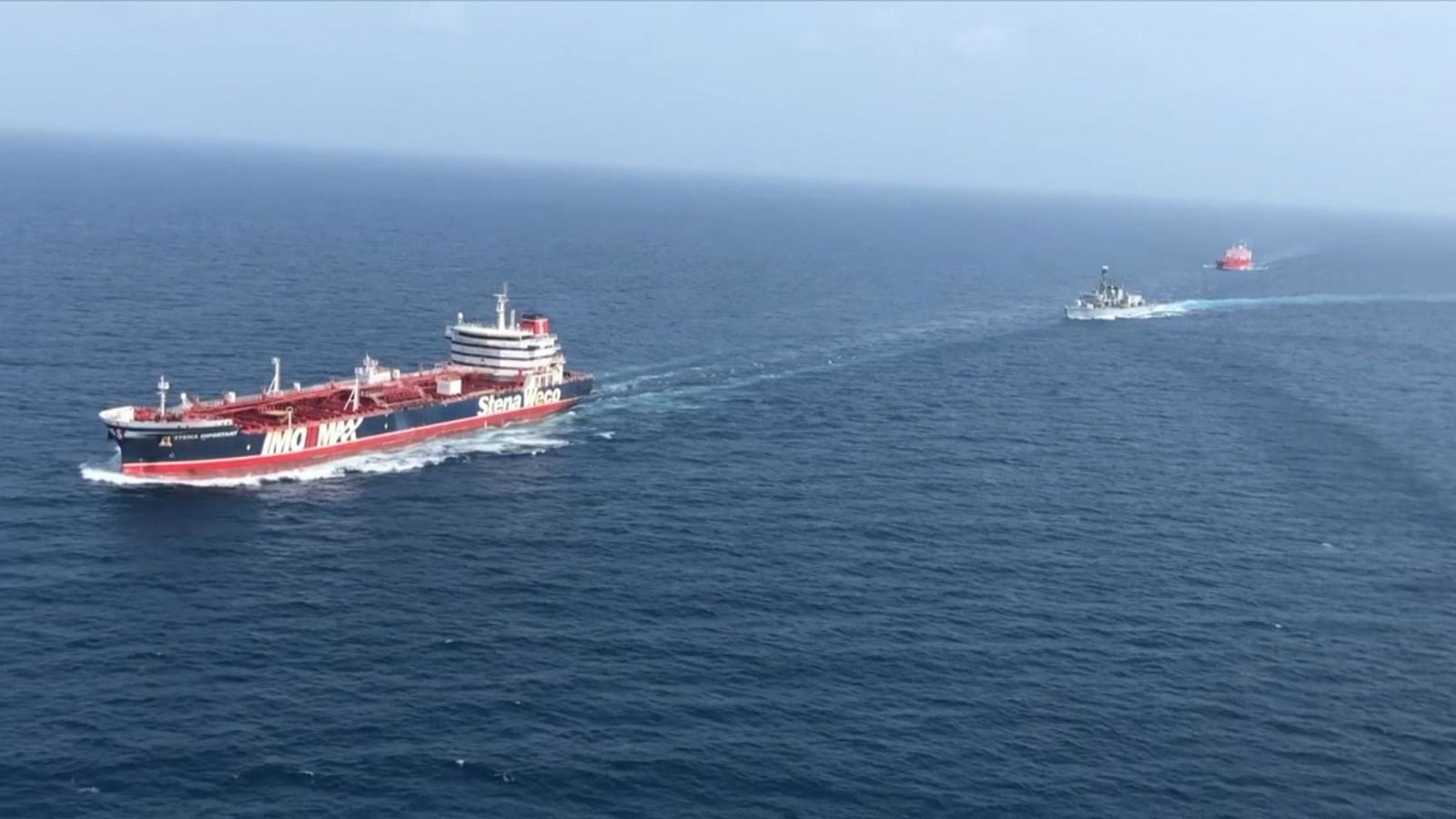 Britain, the US and other allies will meet on Wednesday in Bahrain to discuss plans to build an international coalition to protect shipping in the Gulf, Sky News has learnt.

The UK is considering playing a leading role in any maritime protection force that is ultimately agreed upon, according to two Whitehall sources.

No final decision has yet been made.

The meeting between military representatives in Bahrain, where the US Fifth Fleet is located alongside a Royal Navy base, is a follow-on from a gathering at the US Central Command military headquarters in Tampa, Florida last Thursday.

It is not thought specific commitments have yet been agreed in terms of the shape and size of any maritime coalition, how it will be commanded and which countries will be taking part.

The US has been seeking to build a US-led coalition to provide escorts to international ships passing through the Strait of Hormuz for weeks amid escalating tensions with Iran.

European countries, however, have been reluctant to sign up to such a mission because they oppose US policy on Iran.

President Donald Trump last year pulled the US out of a nuclear deal between Iran and other world powers, re-imposing sanctions on the regime in a policy known as “maximum pressure”.

Britain, France and Germany – the European signatories to the nuclear accord – have been concerned about joining any US-led mission in the Gulf that could be seen as being part of this maximum pressure campaign.

Jeremy Hunt, the previous foreign secretary, in one of his last acts in office, announced last week a plan for a European-led maritime protection force but details about such a mission have remained sketchy.

It is widely understood that any force must have significant US input to be credible, because the US military has the most capability and assets in the region.

Britain, with its uniquely close military and intelligence-sharing relationship with the US and its alignment with European thinking on the Iran nuclear deal, could be a unifying force between the US and Europe if it takes on a leading role – even the lead role – in this maritime protection plan, according to defence experts.

The Royal Navy is already protecting British-flagged ships through the Strait of Hormuz from the threat of an Iranian attack.

British shipping has been under particular threat from Iran after the Royal Marines helped to detain an Iranian super tanker off the coast of Gibraltar at the start of the month.

The UK accuses the Grace 1 tanker of carrying oil bound for Syria in breach of EU sanctions.

Iran has denied the charge, accused Britain of an act of piracy and threatened to retaliate by targeting British flagged tankers in the Gulf.

On 19 July, Iranian forces boarded the UK-flagged Stena Impero tanker as it passed through the Strait of Hormuz. That ship is still detained at an Iranian port.

The threat of further seizures prompted the government to task the Royal Navy with accompanying tankers and other UK-flagged ships along this vital waterway.

HMS Montrose, a Type 23 frigate, and HMS Duncan, a Type 45 destroyer, are in the region carrying out this task.

No final decisions on the shape, size and command of the international maritime protection mission are expected at the Bahrain meeting tomorrow.