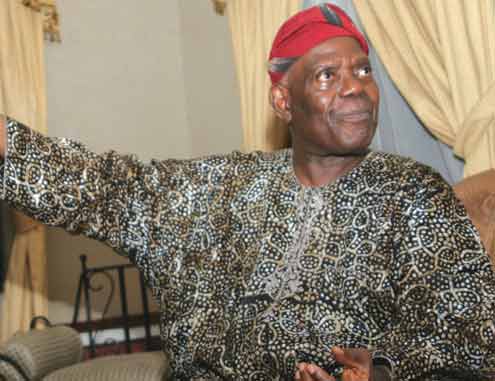 A former Chairman of the All Progressives Congress, APC, Bisi Akande, has alleged that the . Chairman of the party, John Odigie-Oyegun, went about bribing people to facilitate his tenure elongation.

Akande said this while describing tenure elongation as the worst corruption in the world, adding that anyone involved in it is corrupt.

President Muhammadu Buhari had earlier declared that the move to elongate the tenure of Oyegun and others was illegal.

Also during the week, Governors elected under the party met and decided that the party holds its convention to elect new leaders.

Speaking with the Sun, Akande, a former governor, wondered why a leader would not want to step down when their tenure was over.

He said, “Tenure elongation is the worst corruption in the world. Anybody who is on a sit and doesn’t want to leave that sit in a political appointment must be a corrupt person.

“If he or she has not been caught, such a person would be caught one day. I was once a national chairman, if I should say that I don’t want to go, why? What is in it?

“What is the pot of honey that is placed there that would not let me to go? I was once a governor, why shouldn’t I leave after my tenure? If you are so insulted and not confident enough to resign, you must be a corrupt person.

“Tenure elongation is a shameful thing. How can you say you want to sit tight? I even understood that they were bribing people from all over the states to agree to this tenure elongation scheme.

“APC is the party of Nigerians, not few people can scatter it. Tenure elongation is bad, it is killing our party, I am a member of the executive caucus of the APC, for almost a year and half, there has been no meeting of the national executive committee of the party.

“Politics means mobilization; mobilization at ward, local, state and at the federal level. Mobilization involves meetings, rallies, elections, congresses and things like that.

“But when you are sitting down in one place mobilizing nothing and you want to remain there to continue to elongate your stay, the party, which is the platform that put you there, would die while such a person is still there. Only mobilizers can lead parties like the APC, not tenure ‘elongators!’