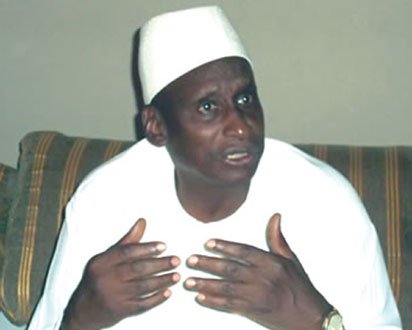 Joint Senate Committee on Police Affairs and National Security and Intelligence report which was submitted to the Senate chambers on Wednesday was witnessed with credibility crisis; hence, 15 out of 25 Senators who are members did not sign the report.

A copy of the report seen by DAILY POST which was condemned and rejected by the red Chambers at Wednesday’s plenary showed that, the joint Chairman, Senator Abu Ibrahim, his co-counterpart, Senator Shaaba Lafiagi with only 6 others endorsed the report. While 2 clerks who served the committee also signed.

Though, the report was condemned and rejected at Wednesday’s plenary, for being biased and one sided, it also showed that the committee relied heavily on the Inspector General of Police’s 8 point submission when he appeared before the committee on 2nd February, 2018.

Part of IG’s report which was adopted by the Senate Committee, curiously, was his visit to Tunga in Awe local government of Nasarawa State where he discovered that they were no armed militias as alleged by governor Samuel Ortom of Benue State as if those armed militias would wait to receive the IG as their august visitor.

The report reads: “That on the strength of claims by the Benue State governor, Mr. Samuel Ortom at the stakeholders meeting alleging that there exist armed militia camped inTunga, in Awe LGA of Nasarawa State awaiting to unleashed mayhem on Nasarawa people, he further visited Nasarawa State for fact finding, and engagement with stakeholders there, where he found that those claims were untrue.”

Secondly, the report indicated that about 21 attacks occurred within one month in Benue State alone, while it claimed that 10 of those attacks were carried out by Tiv militia groups and not Fulani herdsmen. How the Committee arrived at that decisions was not clear, but attempt to speak with Senator Ibrahim for further clarification did not yield results.

Further study of IGP, Ibrahim Idris and Senate Committee report also revealed that the committee tactically avoided comment that the Benue State governor’s Anti-grazing law as being responsible for killings of Benue people by Fulani herdsmen.

A member of the Committee who did not append his signature told DAILY POST that it would amount to rubishing the State lawmakers by saying that the Anti-grazing law which was legally enacted was responsible for crisis in Benue.

“How can the IGP tell us that the Anti-grazing law in Benue was responsible for killings in parts of Benue. Come to think of it, we are doing the same thing at the National Assembly.”

“State lawmakers are our junior colleagues, and in making any law, they would call for public hearing to know the minds of the people they make law for. I cannot be a party to that report. But don’t quote me anyway”, he pointed.

In the IGP’s report, he submitted to the Senate Committee investigating killings in Guma, and Logo local governments in Benue, he has insisted that the killing was triggered by implementation of anti-open grazing law in Benue which took effect from 1st November, 2017.

The report also pointed that governor Ortom has armed untrained civilian JTF/livestocks guards of major Tiv ethnic nationality, saying the composition of JTF was lopsided by not including other tribes.

He also accused the governor of display of corpses during burial ceremony of the deceased, saying, Ortom would have ignored Tiv tradition and buried those corpses secretly so as not to excerbate anger.