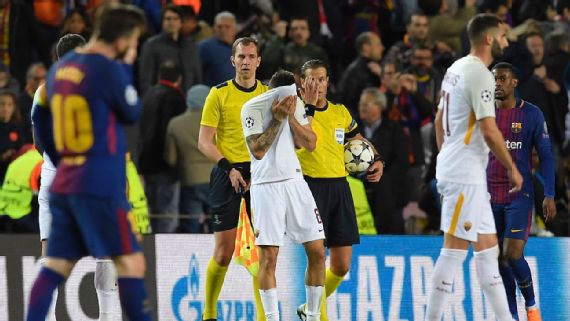 Roma manager, Eusebio Di Francesco, has claimed Barcelona received help from the referee on Wednesday, as the LaLiga leaders beat them 4-1 in the Champions League quarter-finals.

However, Di Francesco also conceded that his own team made too many mistakes, with own goals either side of half-time giving Barca a two-goal lead at Camp Nou.

Gerard Pique added the third before Edin Dzeko pulled one back for the visitors with 10 minutes remaining.

However, Luis Suarez restored the home side’s three-goal lead in the 87th minute to give them a commanding lead going into next week’s second leg.

Di Francesco insists things would have been different, if match official Danny Makkelie had awarded his side two penalties.

“It’s going to be very difficult to qualify from here but it would be less difficult if the referee hadn’t helped them, especially with the big decisions,” Di Francesco said in his postgame news conference.

“But we made mistakes and we made it easy for them, which you can’t do against Barca. Daniele [De Rossi] has made a mistake, which can happen, then [Kostas] Manolas was unfortunate with the second own goal.

“Evidently that’s our fault, but Barca are good enough without help from the officials. Semedo on Dzeko is a clear penalty and then later there’s another on Pellegrini,” he added.

Asked if he felt the scoreline was unfair, Di Francesco added: “Yes, absolutely, given how we played. We had a lot of chances. I think it’s a result that doesn’t demonstrate what we did on the pitch.

“We have to keep dreaming, though. Why not? It’s a result that favours Barca but I want my team to put on a show in front of our fans next week.”