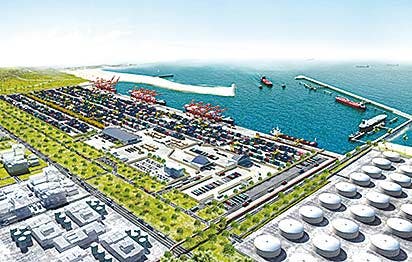 MANAGING Director, Lekki Free Trade Zone Enterprise Limited (promoters of Lekki Port), Mr. Du Ruogang has said that the delivery of the Lekki Deep Sea Port project would go a long way in helping the nation to bridge the gap in the Nigeria’s maritime infrastructure in the shortest time possible.

Speaking at the ongoing Ehingbeti Ruogang organised by the Lagos State Government with the theme “For a Greater Lagos: Setting the Tone for the Next Decade”, Ruogang said that deepening of infrastructure footprints by the Babajide Sanwo-Olu led administration both within the environment where the project is located and other axis of the State is a strong pointer that the State Government is committed to the development of the port and its underlying socio-economic potentials.

He said; “We are very pleased with how well things are going with the construction despite the challenges being encountered all over the world with the COVID-19 pandemic, which is also being felt in Lagos State, and all over the country,” he said, further expressing confidence that the delivery of Lekki Port project would be sooner rather than later.

“While Lagos is not immune from the economic challenges that are being tackled globally, the uniqueness of Lagos State is the willingness of the leadership to go the extra mile to live up to its characteristic of an investor friendly state”.

“Lagos makes a significant contribution to the Nigerian economy. It contributes 30% to Nigeria’s GDP. This is remarkable considering that Lagos is home to only 10% of the population of Nigeria. The majority of Nigeria’s manufacturing is based in Lagos as well as many service industries such as finance. All of these factors combine to encourage industry to locate in Lagos, and that is the reason we are here to look forward to the future possibilities,”