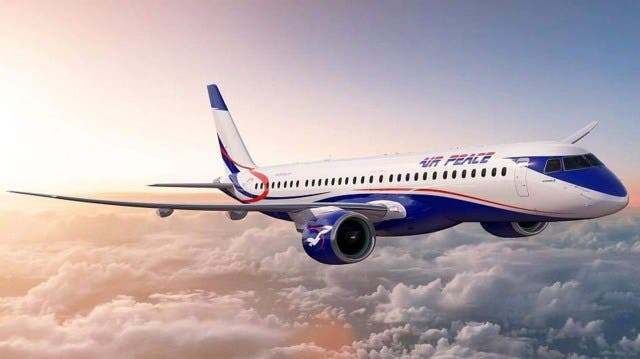 The inaugural direct flight by Air Peace airline from Lagos to Johannesburg, South Africa Thursday has been described as a way to further deepen the bi- litaral and economic relationships between Nigeria and South Africa.
The chairman of Air Peace , Barrister Allen Onyema made the declaration aboard the inaugural flight to South Africa while fielding questions from the media.

According to him, the flight into South Africa, ” has opened up new possibilities for intra-continental businesses, trade , as well as create improve bi-lateral relations between Nigeria and South Africa “.
He also expressed joy at the connection of the two economies stating that it will reduce the travel time between both countries and encourage fluid relationships.
Onyema said : ”I feel great for Nigerians. I feel happy because Air Peace is trying to afford the flying public direct flight to Johannesburg and back to Nigeria instead of going round the world, going round Africa before flying to South Africa. Now in less than six hours we will be there. So it is something that we look forward to doing at greater heights”.
“We promised Nigerians six years ago when we started Air Peace that we are not only going to connect cities in Nigeria and communities , but also connect this country with other nations of the world. Gradually we are getting there”.“
” We don’t want to kid ourselves that we are the only ones on the route now, some other people also will want to come there so for us to sustain the tempo of whatever we are doing, we have to be pragmatic, we have to be strategic too in our planning and like I said, we have been following our business plan since 2014 meticulously”.
” The fact that Air Peace is going into South Africa will boost economic relations, progress between both countries and it’s going to improve our bi-lateral relations, it is something good and no longer one sided, ” he added.
Recall the relationship between Nigeria and South Africa has not been at best since the xenophobic attack on Nigerians living in South Africa . Diplomatic efforts have been ongoing to normalize relationship.
Granting Air Peace rights to operate directly to South Africa is a concrete demonstration of efforts on the part of the South Africa government to normalize ties with Nigeria.