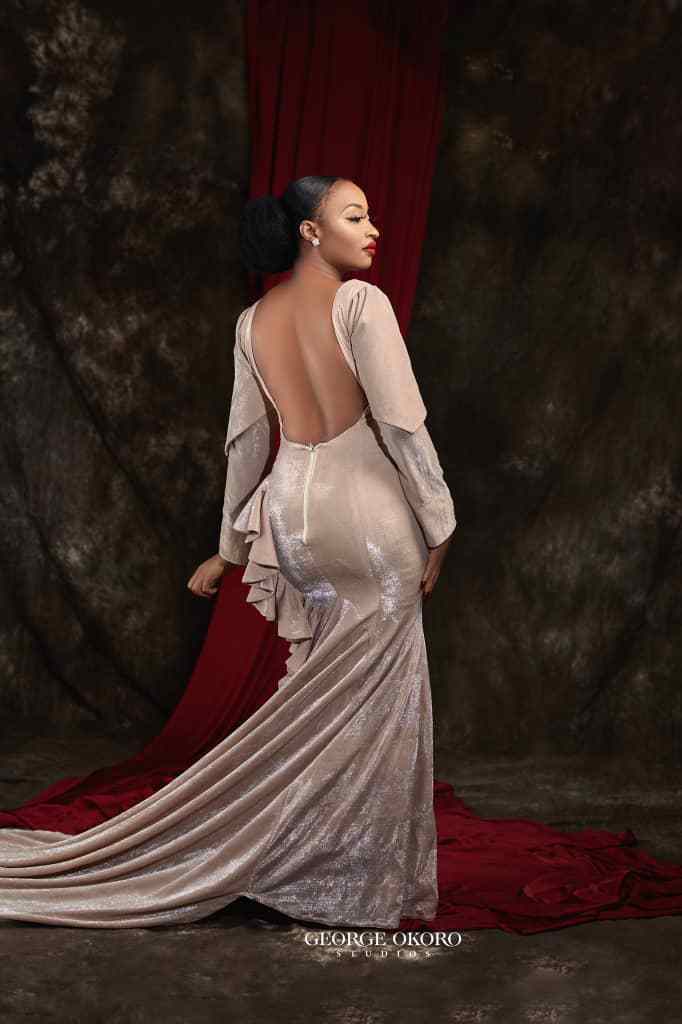 Actress Rahma Sadau is trending on social media, after Nigerians, particularly Arewa youths on Twitter, called her out over indecent dressing.

The beautiful screen goddess, shared photos of herself rocking a “backless” champagne gold gown, which accentuated her curves.

Apparently, this didn’t go down well with Arewa youths on Twitter. According to them, her dress doesn’t conform to the tenets of Islam.

See some of the reactions below;

@haji_abu_ishaq wrote “@Rahma_sadau you’re the reason why all these ignorants of Islam keep tweeting  rubbish on our deen & making it trend just because of your indecent dressing… Advertising ur nakedness is never a civilisation, stop it .May Alah guide us to the straight path…Pls Quickly delete it”

@el_uthman wrote ” If you’re saying Rahma Sadau is not our problem just know that you’re also part of the problem we have, Sadau is one of our problem. For goodness sake Assistant Allah is trending because of that stupid girl Fa Innalillahi wa inna Illaihirrajiun💔😭 You’re a disgrace to us Wlh!”

However, a number of people seem to have risen to the actress’s defence.

See a few reactions below;

@SsamiCharm tweeted “The annoying part is most of the people here judging her do worse behind closed doors. The skeletons in their closets have got muscles.”

@waspapping wrote “I’ve gone passed that stage where I concern myself with people’s mode of dressing. Rahma Sadau can post her nude pictures on this app & I wouldn’t give a fuck or bat an eyelid. My concerns are with the 100’s of lives lost in zamfara, katsina, Borno and the recent #oyigboMassacre”

@Adam_A_Thinker wrote “Hypocrisy won’t let Many people particularly @ArewaTwiter to focus on calling This govt to end insecurity in northern state, They Rather prepare to focus on attacking The personality / life of @Rahma_sadau and so many women from the North.”

@Hisfuturemrs6 wrote “Actually I see nothing wrong with the @Rahma_sadau dressing, if only Arewa Twitter use this energy they use in condemning @Rahma_sadau indecent  dressing to speak up against killings and insecurity in the north, I’m sure the north would be a very peaceful place to live in by now”

Recall that the Kanywood actress’ ban from the film industry after she played a character holding hands and “cuddling” a singer in a pop video got lifted recently.