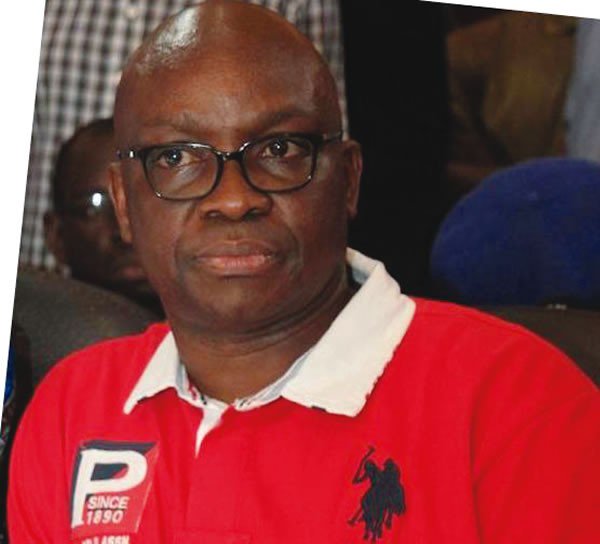 For allegedly masterminded the detention of seven persons for three and half years over complicity in the murder of the ex-Chairman of the National Union of Road Transport Workers (NURTW) in Ekiti State, Chief Omolafe Aderiye, the All Progressives Congress (APC) has announced plan to commence litigation against governor Ayodele Fayose.

Omolafe, a close ally of Fayose, was killed on September 25, 2014 by unknown gunmen in Ado Ekiti.

Seven members were consequently arrested and prosecuted for the crime.

But the State High Court presided over by Justice Lekan Ogunmoye, had in his judgement on Monday struck out the charges preferred against the detainees for want of evidence.

The party, through its Acting State Chairman, Mrs Kemi Olaleye yesterday held a victory rally, where they marched from the popular Okeyinmi area to Ajilosun in a long convoy of vehicles and motorcade conveying the freed ex-detainees.

To prevent a breakdown of law and order, the commissioner of Police, Alhaji Abdullahi Chafe, deployed heavy security along
Okeyinmi-Ajilosun-Akure road.

The rally, according to the State party’s Publicity Secretary, Taiwo Olatunbosun, was to rally support for President Muhamadu Buhari, the party ahead of the impending governorship battle and to mark the return of their members from prison.

He also upbraided Fayose for issuing a white paper banning Dr Kayode Fayemi from holding political office for ten years for alleged corruption, saying: “the former governor is a leader in Nigeria and the governor was only joking with such illegal pronouncement”.

Addressing the crowd at Ijigbo junction, Olaleye said the party will go to court to challenge what she described as “unlawful arrest, imprisonment and prosecution of their members for political reason”.

Olaleye said: “God has vindicated them and the judgement shows that the country’s judiciary is independent and we expect them to do more against Governor Fayose, because he is committing a lot of evils.

“We learnt that he has been bragging that he would re-arrest them, we dare him to do so, because we will go to court to seek redress on this gross abuse of our members’ rights.

“But let me say this, the Inspector General of Police, Mr Ibrahim Idris must reinvestigate the cause of Aderiye’s death. Chief Aderiye was an illustrious son of Ekiti and the cause of his death must be known, he must not die in vain”.

The party further issued seven-day ultimatum to Governor Fayose to release Mr. Sola Adenijo, who was rearrested for another offence immediately they were set freed by court, saying : “we won’t allow our members to be detained while we watch helplessly again”.

The party also declared interest in the reelection bid of President Buhari, saying he deserves the second term considering his
achievements in office.

“Today, more than 10,000 Ekti indigenes across party lines are benefiting from N-Power, the federal housing estate and federal secretariat are under construction and many of our people were appointed into federal boards, commissions and parastatals. The school feeding programme is also a landmark achievement.

“Very soon, this party will release the achievements of President Buhari in Ekiti to the public”, the party said.

On the massacre in Benue, Olaleye sympathized with the Tivs over the losses suffered and indicted the opposition of being behind the killings to discredited Buhari’s government.

Branding the irregular payment of workers’ salaries in Ekiti as wicked and inhuman, Olaleye added: “Governor Fayose earns a sum of N350m monthly and he has collected it up to date.

“But when it comes to the payment of that paltry salaries being taken by workers, he would say there was no money. God will judge him accordingly”, she said.