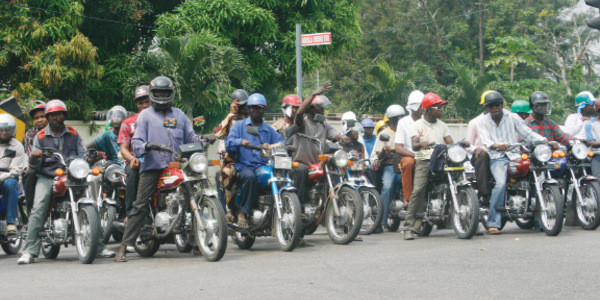 The convicts, Quzairu Sulajo, 19, and Mutaka Isah, 18, of Gwagwa by Tasha, Abuja, had pleaded guilty to a two-count charge of causing an obstruction on a public highway, and riding without National Drivers’ Licence/learners’ permit.

The prosecutor, Zannan Dalhatu, had told the court that the convicts were arrested by a traffic warden at the Karmo Market junction on April 3.

Dalhatu said that the convicts obstructed the free flow of traffic at the market and when they were arrested, they could not produce drivers’ licence.

The prosecutor also said that the offences were punishable under Sections 39 and 7 of the Road Traffic Act.

On their part, the convicts begged the court to temper justice with mercy, promising to be of good conduct and ensure that the necessary particulars were collected.

The judge, Alhaji Abubakar Sadiq, sentenced them to four months in prison. He, however, gave the convicts an option of N5, 000 fines each.

Sadiq said that the sentence would serve as a deterrent to others, and advised the convicts to desist from committing crimes.

He also advised them to read the Road Traffic Act.